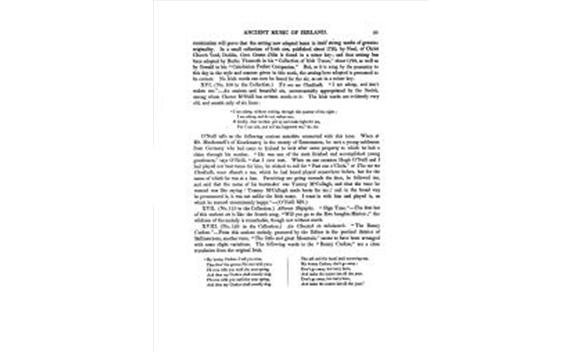 Previous | Next
Bunting - The Ancient Music of Ireland, Volume 1, Issue 1, Page 110
7 views
Favourite | Share | Feedback
periodical Publisher
Hodges & Smith, Dublin, 1840
periodical Editor
Edward Bunting
periodical Title
Bunting - The Ancient Music of Ireland
volume Number
1
issue Content
ANCIENT MUSIC OF IRELAND.95examination will prove that the setting now adopted bears in itself sti ong marks of genuineoriginality. In a small collection of Irish airs, published about 1720, by Neal, of ChristChurch Yard, Dublin, Cara Ceann Dili$ is found in a minor key; and that setting hasbeen adopted by Burke Thumoth in his Collection of Irish Tunes, about 1725, as well asby Oswald in his Caledonian Pocket Companion. But, as it is sung by the peasantry tothis day in the style and manner given in this work, the setting here adopted is presumed tobe correct. No Irish words can now be found for the air, as set in a minor key.XVI. (No. 100 in the Collection.) Ta me mo Chodladh. I am asleep, and dontwaken me.An ancient and beautiful air, unwarrantably appropriated by the Scotch,among whom Hector MNeill has written words to it. The Irish words are evidently veryold, and consist only of six lines:I am asleep, without rocking, through this quarter of the night;I am asleep, and do not waken me;0 kindly, dear mother, g t up and make light for me,- For I am sick, and evil has happened me, &c. &c.ONeill tells us the following curious anecdote connected with this tune. When atMr. Macdonnells of Knockrantry in the county of Roscommon, he met a young noblemanfrom Germany who had come to Ireland to look after some property to which he had aclaim through his mother. He was one of the most finished and accomplished younggentlemen, says ONeill, that I ever met. When on one occasion Hugh ONeill and Ihad played our best tunes for him, he wished to call for Past one oClock, or Tha me moChodladh., naar dhoesk a me, which he had heard played somewhere before, but for thename of which he was at a loss. Perceiving me going towards the door, he followed me,and said that the name of his bootmaker was Tommy MCullagh, and that the tune hewanted was like saying Tommy MCullagh made boots for me; and in the broad wayhe pronounced it, it was not unlike the Irish name. I went in with him and played it, onwhich he seemed uncommonly happy.-.--(ONeill MS.)XVII. (No. 115 in the Collection.) Abhran Sligighe. Sligo Tune.The first barof this ancient air is like the Scotch song, Will you go to the Ewe boughts Marion ; thewildness of the melody is remarkable, though not without merit.XVIII. (No. 125 in the Collection.) An Chuaich in mkaiseacli. The BonnyCuckoo.From this ancient melody, procured by the Editor in the poetical district ofBallinascreen, another tune, The little and great Mountain, seems to have been arrangedwith some slight variations. The following words to the Bonny Cuckoo, are a closetranslation from the original Irish.My bonny Cuckoo I tell you true, The ash and the hazel shall mourning say,That thro the groves Ill rove with you; My bonny Cuckoo, dont go away;Ill rove with you until the next spring, Dont go away, but tarry here,And then my Cuckoo shall sweetly sing. And make the season last all the year.ill rove with you until the next spring, Dont go away, but tarry here,And then my Cuckoo shall sweetly sing. And make the season last all the year.
issue Number
1
page Number
110
periodical Author
Edward Bunting
issue Publication Date
1840-01-01T00:00:00
allowedRoles
anonymous,guest,friend,member