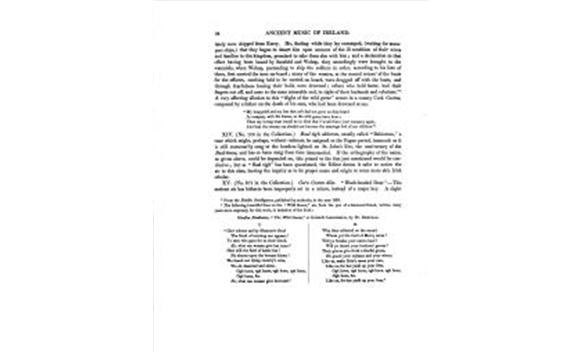 Previous | Next
Bunting - The Ancient Music of Ireland, Volume 1, Issue 1, Page 109
7 views
Favourite | Share | Feedback
periodical Publisher
Hodges & Smith, Dublin, 1840
periodical Editor
Edward Bunting
periodical Title
Bunting - The Ancient Music of Ireland
volume Number
1
issue Content
94ANCIENT MUSIC OF IRELAND.lately were shipped from Kerry. He, finding while they lay encamped, (waiting for trans-port ships,) that they began to desert him upon account of the ill condition of their wivesand families in this kingdom, promised to take them also with him; and a declaration to thateffect having been issued by Sarsfield and Wahop, they accordingly were brought to thewaterside, when Wahop, pretending to ship the soldiers in order, according to his lists ofthem, first carried the men ow board; many of the women, at the second returif of the boatsfor the officers, catching hold to be carried on board, were dragged off with the boats, andthrough fearfulness loosing their hold, were drowned; others who held faster, had theirfingers cut off, and came to the same miserable end, in sight of their husbands and relations. aA very affecting allusion to this Right of the wild geese occurs in a county Cork Caoine,composed by a father on the death of his sons, who had been drowned at sea.My long grief and my loss that you had not gone on ship-boardIn company with Sir James, as the wild geese have done;Then my loving trust would be in God that I would have your company again,And that the stormy sea should not become the marriage bed of my children.XIV. (No. 108 in the Collection.) Baal tigh abhoran, usually called Baltiorum, atune which might, perhaps, without rashness, be assigned to the Pagan period, inasmuch as itis still customarily sung at the bonfires lighted on St. Johns Eve, the anniversary of theBaal-tinne, and has so been sung from time immemorial. If the orthography of the name,as given above, could be depended on, this joined to the fact just mentioned would be con-clusive; but as Baa! tigh has been questioned, the Editor deems it safer to notice theair in this class, leaving the inquiry as to its proper name and origin to some more able Irishscholar.XV. (No. 101 in the Collection.) Cara Ceann dilis. Black-headed Dear.Tbisancient air has hitherto been improperly set in a minor, instead of a major key. A slight& From the Dublin Intelligence, published by authority in the year 1691.b The following beautiful lines on the Wild Geese, are from the pen of a lamented friend, written manyyears since expressly for this work, in imitation of the Irish:Geadha Fiadhaine, The Wild Geese, or Irelands Lamentation, by Dr. DRENNAN.I. II.How solemn sad by Shannons flood Why thus collected on the strandThe blush of morning sun appears! Whom yet the God of Mercy saves?To men who gave for us their blood, Will ye forsake your native land?Ah, what can woman give but tears? Will ye desert your brothers graves?How still the field of battle lies! Their graves give forth a fearful groan,No shouts upon the breezes blown I Oh guard your orphans and your wives;We heard our dying countrys cries, Like us, make Erins cause your own,We sit deserted and alone. Like us, for her yield up your lives.Ogh hone, ogh hone, ogh hone, ogh hone, Ogh hone, 0gb hone, 0gb hone, ogh hone,0gb hone, &C. Ogh hone, &c.Ah, what can woman give but tears? Like us, for her yield up your lives.
issue Number
1
page Number
109
periodical Author
Edward Bunting
issue Publication Date
1840-01-01T00:00:00
allowedRoles
anonymous,guest,friend,member