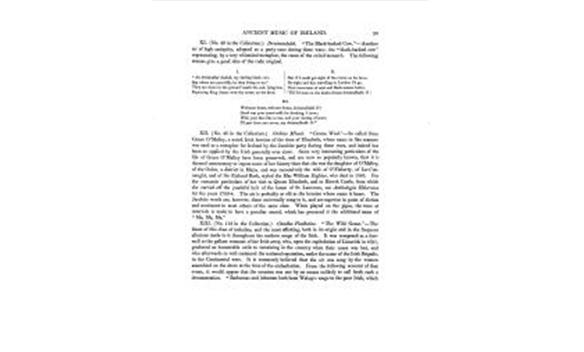 Previous | Next
Bunting - The Ancient Music of Ireland, Volume 1, Issue 1, Page 108
7 views
Favourite | Share | Feedback
periodical Publisher
Hodges & Smith, Dublin, 1840
periodical Editor
Edward Bunting
periodical Title
Bunting - The Ancient Music of Ireland
volume Number
1
issue Content
ANCIENT MUSIC OF IRELAND. 93XI. (No. 42 in the Collection.) Druimindubh. The Black-backed Cow.Anotherair of high antiquity, adopted as a party tune during these wars; the black-backed cowrepresenting, by a very whimsical metaphor, the cause of the exiled monarch. The followingstanzas give a good idea of the rude original.I. II.Ah drimindhu deelish, my darling black cow, But if I could get sight of the crown on his brow,Say where are your folk, be they living or no? By night and day travelling to London id go,They are down in the ground neath the sod, lying low, Over mountains of mist and black mosses below,Expecting King .James with the crown on his brow. Till id beat on the kettle-drums drimindhubh 0.III.Welcome home, welcome home, thimindhubh 0!Good was your sweet-milk for drinking, I trow;With your face like a rose, and your dewlap of snow,Ill part from you never, my drimindhubh 0 !XII. (No. 46 in the Collection.) Grine Mliael. Granu Weal.So called fromGrace 0 Malley, a noted Irish heroine of the time of Elizabeth, whose name in like mannerwas used as a metaphor for Ireland by the Jacobite party during these wars, and indeed hasbeen so applied by the Irish generally ever since. Some very interesting particulars of thelife of Grace OMalley have been preserved, and are now so popularly known, that it isdeemed unnecessary to repeat more of her history than that she was the daughter of OMalley,of the Oules, a district in Mayo, and was successively the wife of OFlaherty, of Jar-Con-naught, and of Sir Richard Burk, styled the Mac William Eighter, who died in 1585. Forthe romantic partic.ulars of her visit to Queen Elizabeth, and to Howth Castle, from whichshe carried off the youthful heir of the house of St. Laurence, see Anthologia Hibernicafor tl1e years 1793-4. The air is probably as old as the heroine whose name it bears. TheJacobite words are, however, those universally sung to it, and are superior in point of dictionand sentiment to most others of the same class. When played on the pipes, the tune atintervals is made to have a peculiar sound, which has procured it the additional name ofMa, Ma, Ma.XIII. (No. 113 in the Collection.) Gadha Fiadhaine. The Wild Geese.Thefinest of this class of melodies, and the most affecting, both in its origin and in the frequentallusions made to it throughout the modern songs of the Irish. It was composed as a fare-well to the gallant remnant of the Irish army, who, upon the capitulation of Limerick in 1691,preferred an honourable exile to remaining in the country when their cause was lost, andwho afterwards so well sustained the national reputation, under the name of the Irish Brigade,in the Continental wars. It is commonly believed that the air was sung by the womenassembled on the shore at the time of the embarkation. From the following account of thatevent, it would appear that the occasion was one by no means unlikely to call forth such ademonstration. Barbarous and inhuman hath been Wahops usage to the poor Irish, which
issue Number
1
page Number
108
periodical Author
Edward Bunting
issue Publication Date
1840-01-01T00:00:00
allowedRoles
anonymous,guest,friend,member