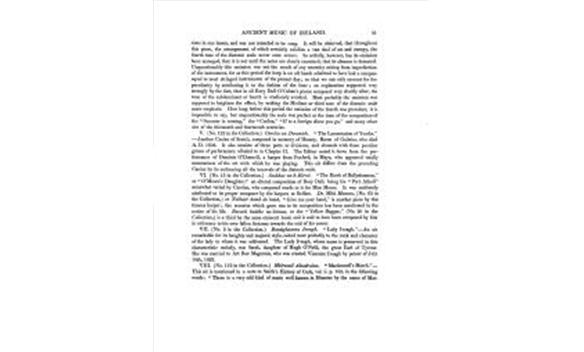 Previous | Next
Bunting - The Ancient Music of Ireland, Volume 1, Issue 1, Page 106
7 views
Favourite | Share | Feedback
periodical Publisher
Hodges & Smith, Dublin, 1840
periodical Editor
Edward Bunting
periodical Title
Bunting - The Ancient Music of Ireland
volume Number
1
issue Content
ANCIENT MUSIC OF IRELAND. 91sions in one lesson, and was not intended to be sung. It will be ob erved, that throughoutthis piece, the arrangement of which certainly exhibits a vast deal of art and energy, thefourth tone of the diatonic scale never once occurs. So artfully, however, has its omissionbeen managed, that it is not until the notes are closely examined, that its absence is detected.Unquestionably this omission was not the result of any necessity arising from imperfectionof the instrument, for at this period the harp is on all hands admitted to have had a compassequal to most stringed instruments of the present day; so that we can only account for thepeculiarity by attributing it to the fashion of the time ; an explanation supported verystrongly by the fact, that in all Rory Dali OCahans pieces composed very shortly after, thetone of the subdominant or fourth is studiously avoided. Most probably the omission wassupposed to heighten the effect, by making the Mediant or third tone of the diatonic scalemore emphatic. low long before this period the omission of the fourth was prevalent, it isimpossible to say, but unquestionably the scale was perfect at the time of the composition ofthe Summer is coming, the Coolun, If to a foreign clime you go, and many otherairs of the thirteenth and fourteenth centuries.V. (No. 122 in the Collection.) Gurnha an Devenish. The Lamentation of Youths.Another Caoine of Scotts, composed in memory of Hussey, Baron of Galtrim, who diedA. D. 1603. It also consists of three parts or divisions, and abounds with those peculiargraces of performance alluded to in Chapter II. The Editor noted it down from the per-formance of Dominic ODonnell, a harper from Foxford, in Mayo, who appeared totallyunconscious of the art with which he was playing. This air differs from the precedingCaoine by its embracing all the intervals of the diatonic scale.VI. (No. 13 in the Collection.) ,Seabhac na h-Rime. The Hawk of Ballyshannon,or OMoores Daughter ; an altered composition of Rory Dali, being his Port Atbollsomewhat varied by Carolan, who composed words to it for Miss Moore. It was uniformlyattributed to its proper composer by the harpers at Belfast. Da Mihi Manum, (No. 63 inthe Collection,) or Tabhair damh do lamh, Give me your hand, is another piece by thisfamous harper; the occasion which gave rise to its composition has been mentioned in thenotice of his life. Bacach buidhe na leimne, or the Yellow Beggar, (No. 20 in theCollection,) is a third by the same eminent hand, and is said to have been composed by himin reference to his own fallen fortunes towards the end of his career.VII. (No. 2 in the Collection.) Bantigheamna Iveagh. Lady Iveagh.An airremarkable for its haughty and majestic style, suited most probably to the rank and characterof the lady to whom it was addressed. The Lady Iveagh, whose name is preserved in thischaracteristic melody, was Sarah, daughter of Hugh ONeill, the great Earl of Tyrone.She was married to Art Roe Magennis, who was created Viscount Iveagh by patent of July18th, 1623.VIII. (No. 112 in the Collection.) M irseail Alasdro inn. Macdonnells March.This air is mentioned in a note to Smiths History of Cork, voi. ii. p. 159, in the followingwords: There is a very odd kind of music well known in Munster by the name of Mac-
issue Number
1
page Number
106
periodical Author
Edward Bunting
issue Publication Date
1840-01-01T00:00:00
allowedRoles
anonymous,guest,friend,member