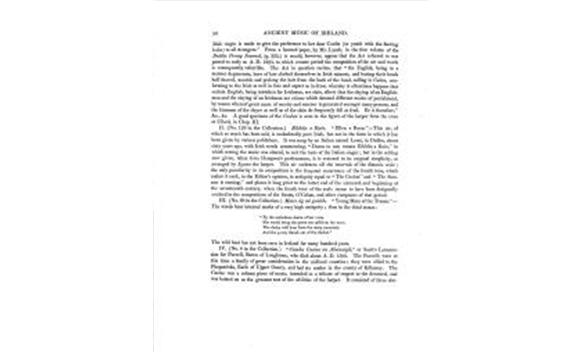 Previous | Next
Bunting - The Ancient Music of Ireland, Volume 1, Issue 1, Page 105
9 views
Favourite | Share | Feedback
periodical Publisher
Hodges & Smith, Dublin, 1840
periodical Editor
Edward Bunting
periodical Title
Bunting - The Ancient Music of Ireland
volume Number
1
issue Content
90 ANCIENT MUSIC OF IRELAND.Irish virgin is made to give the preference to her dear Coulin (or youth with the flowinglocks) to all strangers. From a learned paper, by Mr. Lynch, in the first volume of theDublin Penny Journal, (p. 335,) it would, however, appear that the Act referred to waspassed so early as A. D. 1295, to which remote period the composition of the air and wordsis consequently referrible. The Act in question recites, that the English, being in amanner degenerate, have of late clothed themselves in Irish raiment, and having their headshalf shaved, nourish and prolong the hair from the back of the head, calling it Gulan, con-forming to the Irish as well in face and aspect as in dress, whereby it oftentimes happens thatcertain English, being mistaken for Irishmen, are slain, albeit that the slaying of an English-man and the slaying of an Irishman are crimes which demand different modes of punishment,l)y reason whereof great cause of enmity and rancour is generated amongst many persons, andthe kinsmen of the slayer as well as of the slain do frequently fall at feud. Be it therefore,&c., &c. A good specimen of the Goolun is seen in the figure of the harper from the crossat Ullard, in Chap. III.II. (No. 123 in the Collection.) Rib/tim a Ruin. Ellen a Roon.This air, ofwhich so much has been said, is undoubtedly pure Irish, but not in the form in which it hasbeen given by various publishers. It was sung by an Italian named Leoni, in Dublin, aboutsixty years ago, with Irish words commencing, Ducca tu non vanatu Eibhlin a Ruin, inwhich setting the music was altered, to suit the taste of the Italian singer; but in the settingnow given, taken from Hempsons performance, it is restored to its original simplicity, asarranged byLyons the harper. This air embraces all the intervals of the diatonic scale;the only peculiarity in its composition is the frequent recurrence of the fourth tone, whichmakes it rank, in the Editors opinion, in antiquity equal to The Coolun and The Sum-iner is coming, and places it long prior to the latter end of the sixteenth and beginning ofthe seventeenth century, when the fourth tone of the scale seems to have been designedlyomitted in the compositions of the Scotts, 0 Cahan, and other c mposers of that period.III. (No. 68 in the Collection.) Maire g n gciabh. Young Mary of the Tresses.The words bear internal marks of a very high antiquity; thus in the third stanza:By the melodious charm of her voiceShe would bring the green sea calf from the wave,The dusky wild boar from the misty mountain,And the p:etty thrush out of the thicket.The wild boar has not been seen in Ireland for many hundred years.IV. (No. 8 in the Collection.) Gum/ta Gaoine an Aibanaigh, or Scotts Lamenta-tion for Purcell, Baron of Loughmoe, who died about A. D. 1599. The Purcel.ls were atthis time a family of great consideration in the midland counties; they were allied to theFitzpatricks, Earls of Upper Ossory, and had six castles in the county of Kilkenny. TheCaoine was a solemn piece of music, intended as a tribute of respect to the deceased, andwas looked on as the greatest test of the abilities of the harper. It consisted of three divi-
issue Number
1
page Number
105
periodical Author
Edward Bunting
issue Publication Date
1840-01-01T00:00:00
allowedRoles
anonymous,guest,friend,member