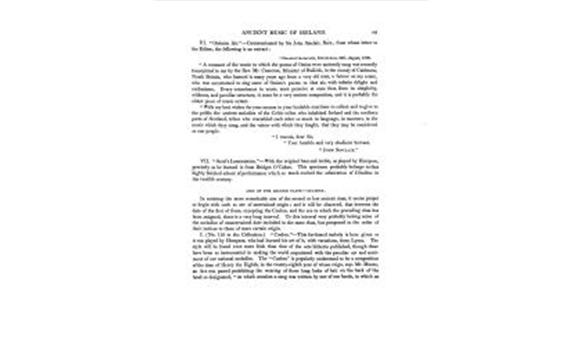 Previous | Next
Bunting - The Ancient Music of Ireland, Volume 1, Issue 1, Page 104
7 views
Favourite | Share | Feedback
periodical Publisher
Hodges & Smith, Dublin, 1840
periodical Editor
Edward Bunting
periodical Title
Bunting - The Ancient Music of Ireland
volume Number
1
issue Content
ANCiENT MUSIC OF IRELAND. S9VI. Ossianic Air.Communicated by Sir John Sinclair, Bart., from whose letter tothe Editor, the following is an extract:CHARLOTTE-SQUARE, EDINBURGH, 30th August, 1808.A remnant of the music to which the poems of Ossian were anciently sung was recentlytransmitted to me by the Rev. Mr. Cameron, Minister of ilalkirk, in the county of Caithness,North Britain, who learned it many years ago from a very old man, a farmer on my estate,who was accustomed to sing some of Ossians poems to that air, with infinite delight andenthusiasm. Every connoisseur in music must perceive at once that, from its simplicity,wildness, and peculiar structure, it must be a very ancient composition, and it is probably theoldest piece of music extant.With my best wishes for your success in your laudable exertions to collect and to give tothe public the ancient melodies of the Celtic tribes who inhabited Ireland and the northernparts of Scotland, tribes who resembled each other so much in language, in manners, in themusic which they sung, and the valour with which they fought, that they may be consideredas one people.I remain, dear Sir,Your humble and very obedient Servant,JOHN SiNcLAIR.VII. Scotts Lamentation.With the original bass and treble, as played by Hempsoii,precisely as he learned it from Bridget 0 Cahan. This specimen probably belongs to thathighly finished school of performance which so much excited the admiration of Giraldus inthe twelfth century.AIRS OF THE SECOND CLASSANCIENT.In noticing the more remarkable airs of the second or less ancient class, it seems properto begin with such as are of ascertained origin; and it will be observed, that between thedate of the first of these, excepting the Coolun, and the era to which the preceding class hasbeen assigned, there is a very long interval. To this interval very probably belong some ofthe melodies of unascertained date included in the same class, but postponed in the order oftheir notices to those of more certain origin.I. (No. 119 in the Collection.) Coolun.This far-famed melody is here given asit was played by Hempson, who had learned his set of it, with variations, from Lyons. Thestyle will be found even more Irish than that of the sets hitherto published, though thesehave been so instrumental in making the world acquainted with the peculiar air and senti-ment of our national melodies. The Coolun is popularly understood to be a compositionof the time of Henry the Eighth, in the twenty-eighth year of whose reign, says Mr. Moore,an Act was passed prohibiting the wearing of those long locks of hair on the back of thehead so designated, on which occasion a song was written by one of our bards, in which an
issue Number
1
page Number
104
periodical Author
Edward Bunting
issue Publication Date
1840-01-01T00:00:00
allowedRoles
anonymous,guest,friend,member