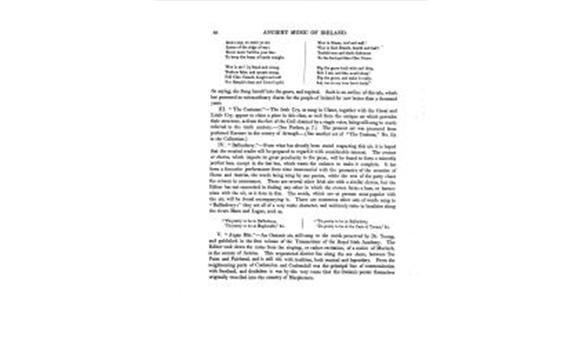 Previous | Next
Bunting - The Ancient Music of Ireland, Volume 1, Issue 1, Page 100
9 views
Favourite | Share | Feedback
periodical Publisher
Hodges & Smith, Dublin, 1840
periodical Editor
Edward Bunting
periodical Title
Bunting - The Ancient Music of Ireland
volume Number
1
issue Content
88ANCIENT MUSIC OF IRELAND.Erins stay, no more ye are Woe to Eman, roof and wall!Rulers of the ridge of war; Woe to Red Branch, hearth and hail!Never more twill be your fate Tenfold woe and black dishonourTo keep the beam of battle straight. To the foul and false Clan Conor.Woe is me! by fraud and wrong, Dig the grave both wide and deep,Traitors false, and tyrants strong, Sick I am, and fain would sleep!Fell Clan Usnach, bought and sold Dig the grave, and make it ready,For Barachs feast and Conors gold. Lay me on my true loves body.So saying, she flung herself into the grave, and expired. Such is an outline of this tale, whichhas possessed an extraordinary charm for the people of Ireland for now better than a thousandyears.III. The Caoinans.The Irish cry, as sung in Ulster, together with the Great andLittle Cry, appear to claim a place in this class, as well from the antique air which pervadestheir structure, as from the fact of the Goll chanted by a single voice, being still sung to wordsreferred to the tenth century.(See Preface, p. 7.) The present set was procured fromprofessed Keeners in the county of Armagh._( See another set of The Caoinan, No. 59,in the Collection.)IV. Ballinderry.From what has already been stated respecting this air, it is hopedthat the musical reader will be prepared to regard it with considerable interest. The cronanor chorus, which imparts its great peculiarity to the piece, will be found to form a tolerablyperfect bass, except in the last bar, which wants the cadence to make it complete. It hasbeen a favourite performance from time immemorial with the peasantry of the counties ofDown and Antrim, the words being sung by one person, while the rest of the party chantthe cronan in consonance. There are several other Irish airs with a similar chorus, but theEditor has not succeeded in finding any other in which the cronan forms a bass, or harmo-nizes with the air, as it does in this. The words, which are at present most popular withthe air, will be found accompanying it. There are numerous other sets of words sung toBallinderry ; they are all of a very rustic character, and uniformly refer to localities alongthe rivers Bann and Lagan, such as,Tis pretty to be in Ballinderry, Tis pretty to be in Baliinderry,Tis pretty to be at Magheralin, &c. Tis pretty to be at the Cash of Toome, &c.V. Argan Mr.An Ossianic air, still sung to the words preserved by Dr. Young,and published in the first volume of the Transactions of the Royal Irish Academy. TheEditor took down the notes from the singing, or rather recitation, of a native of Murloch,in the county of Antrim. This sequestered district lies along the sea shore, between TorPoint and Fairbead, and is still rife with tradition, both musical and legendary. From theneighbouring ports of Cushendun and Cushendall was the principal line of communicationwith Scotland, and doubtless it was by this very route that the Ossianic poems themselvesoriginally travelled into the country of Macpherson.
issue Number
1
page Number
100
periodical Author
Edward Bunting
issue Publication Date
1840-01-01T00:00:00
allowedRoles
anonymous,guest,friend,member