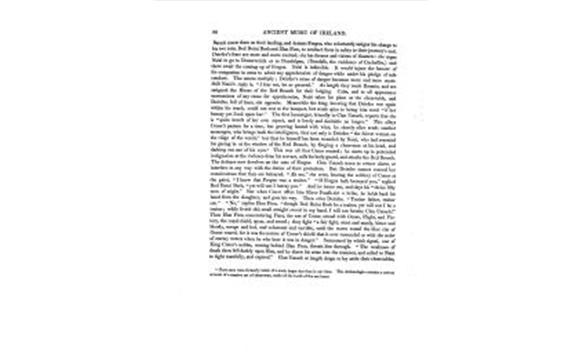 Previous | Next
Bunting - The Ancient Music of Ireland, Volume 1, Issue 1, Page 98
8 views
Favourite | Share | Feedback
periodical Publisher
Hodges & Smith, Dublin, 1840
periodical Editor
Edward Bunting
periodical Title
Bunting - The Ancient Music of Ireland
volume Number
1
issue Content
86 ANCIENT MUSIC OF IRELAND.Barach meets them on their landing, and detains Fergus, who reluctantly assigns his e arge tohis two sons, Red Buini Borb and Illan Finn, to conduct them in safety to their journeys end.Deirdres fears are more and more excited; she has dreams and visions of disasters: she urgesNaisi to go to Dunseverick or to Dundalgan, (Dundalk, the residence of Cuchullin,) andthere await the coming up of Fergus. Naisi is inflexible. It would injure the honour ofhis companion in arms to admit any apprehension of danger while under his pledge of safeconduct. The omens multiply; Deirdres sense of danger becomes more and more acute.Still Naisis reply is, I fear not, let us proceed. At length they reach Emania, and areassigned the House of the Red Branch for their lodging. Calm, and to all appearanceunconscious of any cause for apprehension, Naisi takes his place at the chess-table, andDeirdre, full of fears, sits opposite. Meanwhile the king, knowing that Deirdre was againwithin his reach, could not rest at the banquet, but sends spies to bring him word if herbeauty yet lived upon her. The first messenger, friendly to Clan Usnach, reports that sheis quite bereft of her own aspect, and is lovely and desirable no longer. This allaysConors passion for a time, but growing heated with wine, he shortly after sends anothermessenger, who brings back the intelligence, that not only is Deirdre the fairest woman onthe ridge of the world, but that he himself has been wounded by Naisi, who had resentedhis gazing in at the window of the Red Branch, by flinging a chess-man at his head, anddashing out one of his eyes. This was all that Conor wanted; he starts up in pretendedindignation at the violence done his servant, calls his body-guard, and attacks the Red Branch.The defence now devolves on the Sons of Fergus. Clan Usnach Scorn to evince alarm, orinterfere in any way with the duties of their protectors. But Deirdre cannot conceal herconsciousness that they are betrayed, Ah me, she cries, hearing the soldiery of Conor atthe gates, I knew that Fergus was a traitor. If Fergus hath betrayed you, repliedRed Buini Borb, yet will not I betray you. And he issues out, and slays his thrice fiftymen of might. But when Conor offers him Slieve Fuadli .for a bribe, he holds back hishand from the slaughter, and goes his way. Then cries Deirdre, Traitor father, traitorson. No, replies Illan Finn, though Red Buini Borb be a traitor, yet will not I be atraitor; while liveth this small straight sword in my hand, I will not forsake Clan tlsnach IThen Illan Finn, encountering Fiara, the son of Conor, armed with Ocean, Flight, and Vic-tory, the royal shield, spear, and sword; they fight a fair fight, stout and manly, bitter andbloody, savage and hot, and vehement and terrible, until the waves round the blue rim ofOcean roared, for it was the nature of Conors shield that it ever resounded as with the noiseof stormy waters when he who bore it was in danger. Summoned by which signal, one ofKing Conors nobles, coming behind Illan Finn, thrusts him through. The weakness ofdeath then fell darkly upon Illan, and he threw his arms into the mansion, and called to Naisito fight manfully, and expired. Clan Usnach at length deign to lay aside their chess-tables,Chess-men were formerly made of a much larger size than in our time. The Archwologia contains a curiousaccount of a massive set of chess-men, made of the tooth of the sea horse.
issue Number
1
page Number
98
periodical Author
Edward Bunting
issue Publication Date
1840-01-01T00:00:00
allowedRoles
anonymous,guest,friend,member