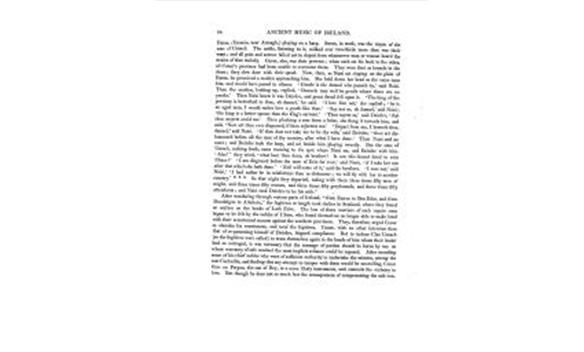 Previous | Next
Bunting - The Ancient Music of Ireland, Volume 1, Issue 1, Page 96
8 views
Favourite | Share | Feedback
periodical Publisher
Hodges & Smith, Dublin, 1840
periodical Editor
Edward Bunting
periodical Title
Bunting - The Ancient Music of Ireland
volume Number
1
issue Content
84 ANCIENT MUSIC OP IRELAND.Eman, (Emania, near Armagh,) playing on a harp. Sweet, in truth, was the music of theSons of Ijsnach. The cattle, listening to it, milked ever two-thirds more than was theirwont; and all pain and sorrow failed not to depart from whatsoever man or woman heard thestrains of that melody. Great, also, was their prowess; when each set his back to the other,all Conors province had been unable to overcome them. They were fleet as hounds in thechase; they slew deer with their speed. Now, then, as Naisi sat singing on the plain ofEman, he perceived a maiden approaching him. She held down her head as she came nearhim, and would have passed in silence. Gentle is the damsel who passeth by, said Naisi.Then the maiden, looking up, replied, Damsels may well be gentle where there are noyouths. Then Naisi knew it was Deirdre, and great dread fell upon it. The king of theprovince is betrothed to thee, oh damsel, he said. I love him not, she replied; he isan aged man, 1 would rather love a youth like thee. Say not so, oh damsel, said Naisi;the king is a better spouse than the k ngs servant. Thou sayest so, said Deirdre, thatthou mayest avoid me. Then plucking a rose from a briar, she flung it towards him, andsaid, Now art thou ever disgraced, if thou rejectest me. Depart from me, I beseech thee,damsel, said Naisi. If thou dost not take inc to be thy wife, said Deirdre, thou art dis-l1onoured before all the men of thy country, after what I have done. Then Naisi said nomore; and Deirdre took the harp, and sat beside him playing sweetly. But the sons ofUsiiach, rushing forth, came running to the spot where Naisi sat, and Deirdre with him.Alas ! they cried, what hast thou done, oh brother? Is not this damsel fated to ruinUlster? I am disgraced before the men of Erin for ever, said Naisi, if I take her notafter that which she hath done. Evil will come of it, said the brothers. I care not, saidNaisi, I had rather be in misfortune than in dishonour; we will fly with her to anothercountry. * * So that night they departed, taking with them three times fifty men ofmight, and three times fifty women, and three times fifty greyhounds, and three times fiftyattendants; and Naisi took Deirdre to be his wife.After wandering through various parts of Ireland, from Easroe to Ben Edar, and fromDundelgan to Almhuii , the fugitives at length took shelter in Scotland, where they foundan asylum on the banks of Loch Etive. The loss of three warriors of such repute soonbegan to be felt by the nobles of Ulster, who found themselves no longer able to make headwith their accustomed success against the southern provinces. They, therefore, urged Conorto abandon his resentment, and recal the fugitives. Conor, with no other intention thanthat of re-possessing himself of Deirdre, feigned compliance. But to induce Clan IJsnach(so the fugitives were called) to trust themselves again in the hands of him whom their leaderhad so outraged, it was necessary that the message of pardon should be borne by one onwhose warranty of safe conduct the most implicit reliance could be reposed. After soundingsome of his chief nobles who were of sufficient authority to undertake the mission, among therest Cuchiulljn, and finding that any attempt to tamper with them would be unavailing, Conorfixes on Fergus, the son of Roy, as a more likely instrument, and commits the embassy tohim. But though he does not so much fear the consequences of compromising the safe con-
issue Number
1
page Number
96
periodical Author
Edward Bunting
issue Publication Date
1840-01-01T00:00:00
allowedRoles
anonymous,guest,friend,member