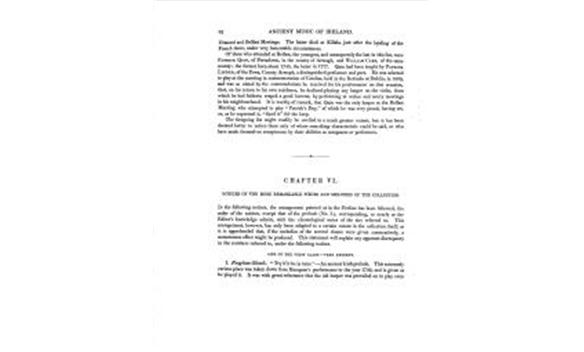 Previous | Next
Bunting - The Ancient Music of Ireland, Volume 1, Issue 1, Page 94
8 views
Favourite | Share | Feedback
periodical Publisher
Hodges & Smith, Dublin, 1840
periodical Editor
Edward Bunting
periodical Title
Bunting - The Ancient Music of Ireland
volume Number
1
issue Content
82 ANCIENT MUSIC OF IRELAND.Granard and Belfast Meetings. The latter died at Killala, just after the landing of theFrench there, under very lamentable circumstances.Of those who attended at Belfast, the youngest, and consequently the last in this list, werePATRICK QUIN, of Portadown, in the county of Armagh, and WILLIAM CARR, of the samecounty; the former born about 1745, the latter in 1777. Quin had been taught by PATRICKLINDEN, of the Fews, County Armagh, a distinguished performer and poet. He was selectedto play at the meeting in commemoration of Carolan, held in the Rotunda at Dublin, in 1809,and was so elated by the commendations he received for his performance on that occasion,that, on his return to his own residence, he declined playing any longer on the violin, fromwhich he had hitherto reaped a good harvest, by performing at wakes and merry meetingsin his neighbourhood. It is worthy of remark, that Quin was the only harper at the BelfastMeeting who attempted to play Patricks Day, of which he was very proud, having set,or, as he expressed it, fixed it fot the harp.The foregoing list might readily be swelled to a much greater extent, but it has beendeemed better to notice those only of whom something characteristic could be said, or whohave made themselves conspicuous by their abilities as composers or performers.CHAPTER V I.NOTICES OF THE MORE REMARKABLE PIECES AND MEL0DIES OP THE COLLECTION.IN the following notices, the arrangement pointed at in the Preface has been followed, theorder of the notices, except that of the prelude (No. I.), corresponding, as nearly as theEditors knowledge admits, with the chronological series of the airs referred to. Thisarrangement, however, has only been adopted to a certain extent in the collection itself, asit is apprehended that, if the melodies of the several classes were given consecutively, amonotonous effect might be produced. This statement will explain any apparent discrepancyin the numbers referred to, under the following notices.AIRS OF THE FIRST CLASSVERY ANCIENT.I. Feaglian Gleash. Try if it be in tune.An ancient Irish prelude. This extremelycurious piece was taken down from Hempsons performance in the year 1792, and is given ashe played it. It was with great reluctance that the old harper was prevailed on to play even
issue Number
1
page Number
94
periodical Author
Edward Bunting
issue Publication Date
1840-01-01T00:00:00
allowedRoles
anonymous,guest,friend,member