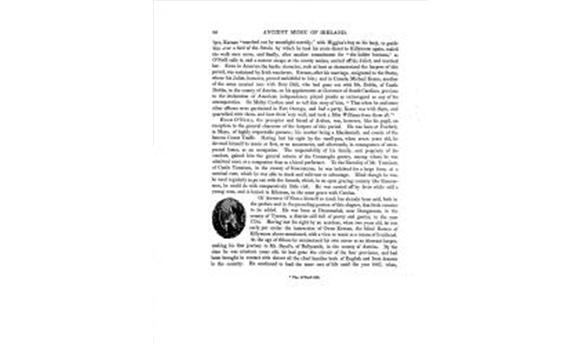 Previous | Next
Bunting - The Ancient Music of Ireland, Volume 1, Issue 1, Page 92
11 views
Favourite | Share | Feedback
periodical Publisher
Hodges & Smith, Dublin, 1840
periodical Editor
Edward Bunting
periodical Title
Bunting - The Ancient Music of Ireland
volume Number
1
issue Content
80ANCIENT MUSIC OF IRELAND.lyre, Keenan marched out by moonlight merrily, with Higginss boy on his back, to guidehim over a ford of the Strule, by which he took his route direct to Killymoon again, scaledthe walls once more, and finally, after another commitment for the ladder business, asONeill calls it, and a narrow escape at the county assizes, carried off his Juliet, and marriedher. Even in America the bardic character, such at least as characterized the harpers of thisperiod, was sustained by Irish wanderers. Keenan, after his marriage, emigrated to the States,where his Juliet, however, proved unfaithful to him; and in Canada, Michael Keane, anotherof the same musical race with Rory Dali, who had gone out with Mr. Dobbs, of CastleDobbs, in the county of Antrim, on his appointment as Governor of South Carolina, previousto the declaration of American independence, played pranks as extravagant as any of hiscotemporaries. Sir Malby Crofton used to tell this story of him, That when he and someother officers were garrisoned in Fort Oswego, and had a party, Keane was with them, andquarrelled with them, and beat them very well, and took a Miss Williams from them al1. aHuon ONEILL, the preceptor and friend of Arthur, was, however, like his pupil, anexception to the general character of the harpers of this period. He was born at Foxford,in Mayo, of highly respectable parents; his mother being a Macdonnell, and cousin of thefamous Count Taaffe. Having lost his sight by the small-pox, when seven years old, liedevoted himself to music at first, as an amusement, and afterwards, in consequence of unex-pected losses, as an occupation. The respectability of his family, and propriety of hisconduct, gained him the general esteem of the Connaught gentry, among whom he wasadmitted more as a companion than as a hired performer. To the liberality of Mr. Tennison,of Castle Tennison, in the county of Roscommon, he was indebted for a large farm, at anominal rent, which he was able to stock and cultivate to advantage. Blind though he was,he used regularly to go out with the hounds, which, in an open grazing country like Roscom-nion, lie could do with comparatively little risk. He was carried off by fever while still ayoung man, and is buried in Kilronan, in the same grave with Carolan.Of ARTHUR ONEILL himself so much has already been said, both inthe preface and in the preceding portion of this chapter, that little remainsto be added. He was born at Drumnaslad, near Dungannon, in thecounty of Tyrone, a district still full of poetry and genius, in the year1734. Having lost his sight by an accident, when two years old, he wasearly put under the instruction of Owen Keenan, the blind Romeo ofKillymoon above-mentioned, with a view to music as a means of livelihood.At the age of fifteen he commenced his own career as an itinerant harper,making his first journey to Mr. Boyds, of Ballycastle, in the county of Antrim. By thetime he was nineteen years old, he had gone the circuit of the four provinces, and hadbeen brought in contact with almost all the chief families both of English and Irish descentin the country. He continued to lead the same sort of life until the year 1807, when,a The ONeill MS.
issue Number
1
page Number
92
periodical Author
Edward Bunting
issue Publication Date
1840-01-01T00:00:00
allowedRoles
anonymous,guest,friend,member