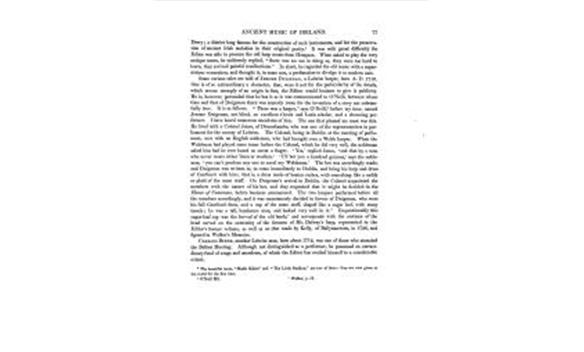 Previous | Next
Bunting - The Ancient Music of Ireland, Volume 1, Issue 1, Page 89
6 views
Favourite | Share | Feedback
periodical Publisher
Hodges & Smith, Dublin, 1840
periodical Editor
Edward Bunting
periodical Title
Bunting - The Ancient Music of Ireland
volume Number
1
issue Content
ANCIENT MUSIC OF IRELAND. 77Derry; a district long famous for the construction of such instruments, and for the preserva-tion of ancient Irish melodies in their original purity.a It was with great difficulty theEditor was able to procure the old harp music from Hempson. When asked to play the veryantique tunes, he uniformly replied, there was no use in doing so, they were too hard tolearn, they revived painful recollections. In short, he regarded the old music with a super-stitious veneration, and thought it, in some sort, a profanation to divulge it to modern ears.Some curious tales are told of JEROME DUIGENAN, a Leitrim harper, born A. ID. 1710.One is of so extraordinary a character, that, were it not for the particularity of the details,which savour strongly of an origin in fact, the Editor would hesitate to give it publicity.He is, however, persuaded that he has it as it was communicated to ONeill, between whosetime and that of Duigenan there was scarcely room for the invention of a story not substan-tially true. It is as follows. There was a harper, says O Nei1l,b before my time, namedJerome Duigenan, not blind, an excellent Greek and Latin scholar, and a charming per-former. I have heard numerous anecdotes of him. The one that pleased me most was this.He lived with a Colonel Jones, of Drumshambo, who was one of the representatives in par-liament for the county of Leitrim. The Colonel, being in Dublin at the meeting of parlia-ment, met with an English nobleman, who had brought over a Welsh harper. When theWeishman had played some tunes before the Colonel, which he did very well, the noblemanasked him had. he ever heard so sweet a finger. Yes, replied Jones, and that by a manwho never wears either linen or woollen. Ill bet you a hundred guineas, says the noble-man, you cant produce any one to excel my Weishman. The bet was accordingly made,and Duigenan was written to, to come immediately to Dublin, and bring his harp and dressof Gauthack with him; that is, a dress made of beaten rushes, with something like a caddyor plaid of the same stuff. On Duigenans arrival in Dublin, the Colonel acquainted themembers with the nature of his bet, and they requested that it might be decided in theHouse of Commons, before business commenced. The two harpers performed before allthe members accordingly, and it was unanimously decided in favour of Duigenan, who worehis full Cauthack dress, and a cap of the same stuff, shaped like a sugar loaf, with manytassels; he was a tall, handsome man, and looked very well in it. Unquestionably thissugar-loaf cap was the barrad of the old bards,c and corresponds with the costume of thehead carved on the extremity of the forearm of Mr. Daiways harp, represented in theEditors former volume, as well as on that made by Kelly, of Ballynascreen, in 1726, andfigured in Walkers Memoirs.CHARLES BYRNE, another Leitrim man, born about 1712, was one of those who attendedthe Belfast Meeting. Although not distinguished as a performer, he possessed an extraor-dinary fund of songs and anecdotes, of which the Editor has availed himself to a considerableextent.a The beautiful tunes, Sliebh Gallen and The Little Swallow, are two of them: they are now given tothe world for the first time.b ONeill MS. c Walker, p. 15.
issue Number
1
page Number
89
periodical Author
Edward Bunting
issue Publication Date
1840-01-01T00:00:00
allowedRoles
anonymous,guest,friend,member