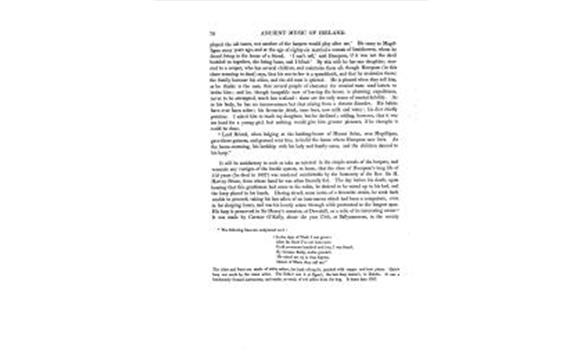 Previous | Next
Bunting - The Ancient Music of Ireland, Volume 1, Issue 1, Page 88
6 views
Favourite | Share | Feedback
periodical Publisher
Hodges & Smith, Dublin, 1840
periodical Editor
Edward Bunting
periodical Title
Bunting - The Ancient Music of Ireland
volume Number
1
issue Content
76 ANCIENT MUSIC OF IRELAND.played the old tunes, not another of the harpers would play after me. He came to Magil-ligan many years ago, and at the age of eighty-six married a woman of Innishowen, whom hefound living in the house of a friend. I cant tell, said Hempson, if it was not the devilbuckled us together, she being lame, and I blind. By this wife he has one daughter, mar-ried to a cooper, who has several children, and maintains them all, though Hempson (in thisalone seeming to doat) says, that his son-in-law is a spendthrift, and that he maintains them;the family humour his whim, and the old man is quieted. He is pleased when they tell him,as he thinks is the case, that several people of character for musical taste send letters toinvite him; and he, though incapable now of leaving the house, is planning expeditions,never to be attempted, much less realized : these are the only traces of mental debility. Asto his body, he has no inconvenience but that arising from a chronic disorder. His habitshave ever heen sober; his favourite drink, once beer, now milk and water ; his diet chieflypotatoes. I asked him to teach my daughter, but he declined; adding, however, that it wastoo hard for a young girl, but nothing would give him greater pleasure, if he thought itcould be done.Lord Bristol, when lodging at the bathing-house of Mount Salut, near Magilligan,gave three guineas, and ground rent free, to build the house where Hempson now lives. Atthe house-warming, his lordship with his lady and family came, and the children danced tohis harp.It will be satisfactory to such as take an interest in the simple annals of the harpers, andvenerate any vestiges of the bardic system, to learn, that the close of Hempsons long life of112 years (he died in 1807) was rendered comfortable by the humanity of the Rev. Sir H.Harvey Bruce, from whose hand he was often literally fed. The day before his death, uponhearing that this gentleman had come to his cabin, lie desired to be raised up in his bed, andthe harp placed in his hands. Having struck some notes of a favourite strain, he sunk backunable to proceed, taking his last adieu of an instrument which had been a companion, evenin his sleeping hours, and was his hourly solace through a life protracted to the longest span.His harp is preserved in Sir Henrys mansion, at Downhill, as a relic of its interesting owner.aIt was made by Cormac OKelIy, about the year 1700, at Ballynascreen, in the countya The following lines are sculptured on it;In the days of Noah I was green;After his flood Ive not been seenUntil seventeen hundred and two, I was found,By Cormac Kelly, under ground;He raised me up to that degree,Queen of Music they call me.The sides and front are made of white sallow, the back of bog fir, patched with copper and iron plates. Quinsharp was made by the same artist. The Editor saw it at Egans, the late harp makers, in Dublin. It was ahandsomely formed instrument, and made, as usual, of red sallow from the bog. It bears date 1707.
issue Number
1
page Number
88
periodical Author
Edward Bunting
issue Publication Date
1840-01-01T00:00:00
allowedRoles
anonymous,guest,friend,member