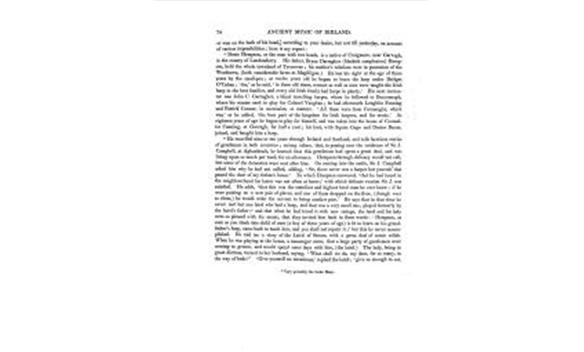 Previous | Next
Bunting - The Ancient Music of Ireland, Volume 1, Issue 1, Page 86
2 views
Favourite | Share | Feedback
periodical Publisher
Hodges & Smith, Dublin, 1840
periodical Editor
Edward Bunting
periodical Title
Bunting - The Ancient Music of Ireland
volume Number
1
issue Content
74 ANCIENT MUSIC OF IRELAND.or wen on the back of his head,] according to your desire, but not till yesterday, on accountof various impossibilities; here is my report:Denis Hempson, or the man with two heads, is a native of Craigmore, near Garvagh,in the county of Londonderry. His father, Bryan Darragher (blackish complexion) Hemp-son, held the whole towniand of Tyrcrevan; his mothers relations were in possession of theWoodtown, (both considerable farms at Magilligan.) He lost his sight at the age of threeyears by the small-pox; at twelve years old he began to learn the harp under BridgetOCahan; for, as he said, in these old times, women as well as men were taught the Irishharp in the best families, and every old Irish family had harps in plenty. His next instruc-tor was John C. Garragher, a blind travelling harper, whom he followed to Buncranagh,where his master used to play for Colonel Vaughan; he had afterwards Loughlin Fanningand Patrick Connor, in succession, as masters. All these were from Connaught, whichwas, as he added, the best pai t of the kingdom for Irish harpers, and for music. Ateighteen years of age he began to play for himself, and was taken into the house of Counsel-lor Canning, at Garvagh, for half a year; his host, with Squire Gage and Doctor Bacon,joined, and bought him a harp.He travelled nine or ten years through Ireland and Scotland, and tells facetious storiesof gentlemen in both countries ; among others, that, in passing near the residence of Sir J.Campbell, at Aghanbrach, he learned that this gentleman had. spent a great deal, and wasliving upon so much per week for an allowance. Hempson through delicacy would not call,but some of the domestics were sent after him. On coming into the castle, Sir J. Campbellasked him why he had not called, adding, Sir, there never was a harper but yourself thatpassed the door of my fathers house. To which Hempson answered, that he had heard inthe neighbourhood his honor was not often at home; with which delicate evasion Sir J. wassatisfied. He adds, that this was the stateliest and highest bred man lie ever knew; if hewere putting on a new pair of gloves, and one of them dropped on the floor, (though everso clean,) he would. order the servant to bring another pair. He says that in that time henever met but one laird who had a harp, and that was a very small one, played formerly bythe lairds father ;a and that when he had tuned it.with new strings, the Jaird and his ladywere so pleased with his music, that they invited him back in these words: Hempson, assoon as you think this child of ours (a boy of three years of age) is fit to learn on his grand-fathers harp, come back to teach him, and you shall not repent it; but this he never accom-plished. He told me a story of the Laird of Strone, with a great deal of comic relish.When he was playing at the house, a messenger came, that a large party of gentlemen werecoming to grouse, and would spend some days with him, (the laird.) The lady, being ingreat distress, turned to her husband, saying, What shall we do, my dear, for so many, inthe way of beds? Give yourself no uneasiness, replied the laird; give us enough to eat,a Very probably the Lude Harp.
issue Number
1
page Number
86
periodical Author
Edward Bunting
issue Publication Date
1840-01-01T00:00:00
allowedRoles
anonymous,guest,friend,member