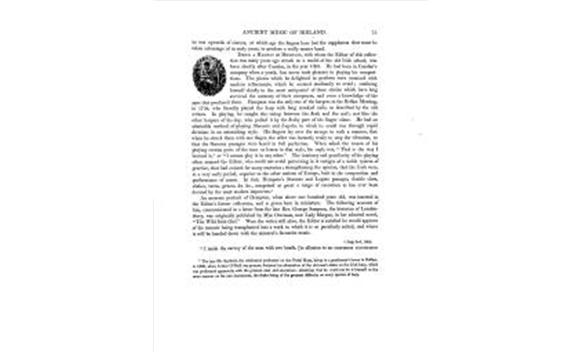 Previous | Next
Bunting - The Ancient Music of Ireland, Volume 1, Issue 1, Page 85
5 views
Favourite | Share | Feedback
periodical Publisher
Hodges & Smith, Dublin, 1840
periodical Editor
Edward Bunting
periodical Title
Bunting - The Ancient Music of Ireland
volume Number
1
issue Content
ANCIENT MUSIC OF IRELAND.73he was upwards of sixteen, at which age the fingers have lost the suppleness that must betaken advantage of in early years, to produce a really master hand.DENTS A I-IAMpsy or HEMPSON, with whom the Editor of this collec-tion was many years ago struck as a model of the old Irish school, wasborn shortly after Carolan, in the year 1695. He had been in Carolanscompany when a youth, but never took pleasure in playing his composi-tions. The pieces which he delighted to perform were unmixed withmodern refinements, which he seemed studiously to avoid; confininghimself chiefly to the most antiquatet 1 of those strains which have longsurvived the memory of their composers, and even a knowledge of theages that produced them. Hernpson was the only one of the harpers at the Belfast Meeting,in 1792, who literally played the harp with long crooked nails, as described by the oldwriters. In playing, he caught the, string between the flesh and the nail; not like theother harpers of his day, who pulled it by the fleshy part of the finger alone. He had anadmirable method of playing Staccato and Legato, in which he could run through rapiddivisions in an astonishing style. His fingers lay over the strings in such a manner, thatwhen he struck them with one finger, the other was instantly ready to stop the vibration, sothat the Staccato passages were heard in full perfection. \Vhicn asked the reason of hisplaying certain parts of the tune or lesson in that style, his reply was, That is the way Ilearned it, or I cannot play it in any other. The intricacy and peculiarity of his playingoften amazed the Editor, who could not avoid perceiving in it vestiges of a noble system ofpractice, that had existed for many centuries; strengthening the opinion, that the Irish were,at a very early period, superior to the other nations of Europe, 1)0th in the composition andperformance of music. In fact, Hempsons Staccato and Legato passages, double slurs,shakes, turns, graces, &c. &c., comprised as great a range of execution as has ever beendevised by the most modern improvers.An accurate portrait of Hempson, when above one hundred years old, was inserted inthe Editors former collection, and is given here in miniature. The following account ofhim, communicated in a letter from the late Rev. George Sampson, the historian of London-derry, was originally published by Miss Owenson, now Lady Morgan, in her admired novel,The Wild Irish Girl. Were the writer still alive, the Editor is satisfied he would approveof his memoir being transplanted into a work to which it is so peculiarly suited, and whereit will be handed down with the minstrels favourite music.Ju1 j 3rd, 1805.I made the survey of the man with two heads, [ in allusion to an enormous excrescencea The late Mr. Seybold, the celebrated performer on the Pedal Harp, being in a gentlemans house in Belfast,in 1800, when Arthur ONeill was present, declared his admiration of the old mans shake on the Irish harp, whichwas performed apparently with the greatest ease and execution; admitting that he could not do it himself in thesame manner on his own instrument, the shake being of the greatest difficulty on every species of harp.
issue Number
1
page Number
85
periodical Author
Edward Bunting
issue Publication Date
1840-01-01T00:00:00
allowedRoles
anonymous,guest,friend,member