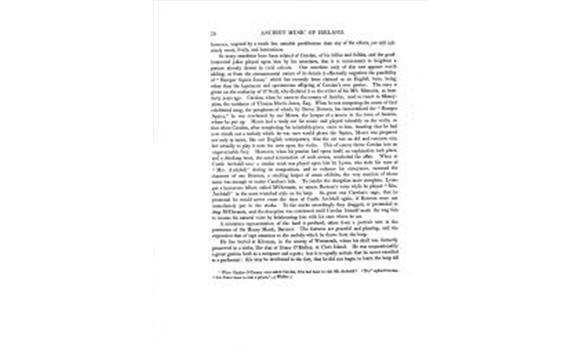 Previous | Next
Bunting - The Ancient Music of Ireland, Volume 1, Issue 1, Page 84
4 views
Favourite | Share | Feedback
periodical Publisher
Hodges & Smith, Dublin, 1840
periodical Editor
Edward Bunting
periodical Title
Bunting - The Ancient Music of Ireland
volume Number
1
issue Content
72 ANCIENT MUSIC OF IRELAND.however, inspired by a much less amiable predilection than any of the others, yet still infi -nitely sweet, lively, and harmonious.So many anecdotes have been related of Carolan, of his follies and foibles, and the good-hinnoured jokes played upon him by his associates, that it is unnecessary to heighten apicture already drawn in vivid colours. One anecdote only of this sort appears worthadding, as from the circumstantial nature of its details it effectually negatives the possibilityof Bumper Squire Jones, which has recently been claimed as an English tune, beingother than the legitimate and spontaneous offspring of Carolans own genius. The story isgiven on the authority of ONeill, who dictated it to the writer of his MS. Memoirs, at leastforty years ago. Carolan, when he came to the county of Antrim, used to resort to Money-glass, the residence of Thomas Morris Jones, Esq. When he was composing the music of thatcelebrated song, the paraphrase of which, by Baron Dawson, has immortalized the BumperSquire, lie was overheard by one Moore, the keeper of a tavern in the town of Antrim,where lie put up. Moore had a ready ear for music and played tolerably on the violin, sothat when Carolan, after completing his inimitable piece, came to him, boasting that he hadnow struck out a melody which he was sure would please the Squire, Moore was preparednot only to insist, like our English cotemporary, that the air was an old and common one,but actually to play it note for note upon the violin. This of course threw Carolan into anungovernable fury. 1-lowever, when his passion had spent itself, an explanation took place,and a drinking bout, the usual termination of such scenes, concluded the affair. When atCastle Arch dali too,a a similar trick was played upon him by Lyons, who stole his tune ofMrs. Archdall, during its composition, and to enhance his annoyance, assumed thecharacter of one Berreen, a strolling harper of mean abilities, the very mention of whosename was enough to excite Carolans bile. To render the deception more complete, Lyonsgot a humorous fellow, called MDermott, to mimic Berreens voice while he played Mrs.Archdall in the most wretched style on his harp. So great was Carolans rage, that heprotested he would never enter the door of Castle Archdall again, if Berreen were notimmediately put in the stocks. To the stocks accordingly they dragged, or pretended todrag MDermott, and the deception was continued until Carolan himself made the wag fainto resume his natural voice by belabouring him with his cane where he sat.A miniature representation of the bard is prefixed, taken from a portrait now in thepossession of Sir Henry Marsh, Baronet. The features are graceful and pleasing, and theexpression that of rapt attention to the melody which he draws from the harp.He lies buried at Kilronan, in the county of Westmeath, where his skull was formerlypreserved in a niche, like that of Grace OMalley, at Clare Island. He was unquestionablya great genius, both as a composer and a poet; but it is equally certain that he never excelledas a performer: this may be attributed to the fact, that he did not begin to learn the harp tillWhen Charles OConnor once asked Carolan, if he had been to visit Mr. Archdall? No, replied Carolan,hut I have been to visit a prince.( W*ilcer.)
issue Number
1
page Number
84
periodical Author
Edward Bunting
issue Publication Date
1840-01-01T00:00:00
allowedRoles
anonymous,guest,friend,member