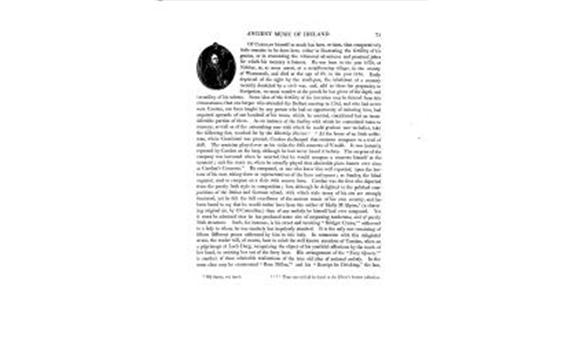 Previous | Next
Bunting - The Ancient Music of Ireland, Volume 1, Issue 1, Page 83
4 views
Favourite | Share | Feedback
periodical Publisher
Hodges & Smith, Dublin, 1840
periodical Editor
Edward Bunting
periodical Title
Bunting - The Ancient Music of Ireland
volume Number
1
issue Content
ANCIENT MUSIC OI IRELAND.71Of CAROLAN himself so much has been written, that comparativelylittle remains to be done here, either in illustrating the fertility of hisgenius, or in recounting the whimsical adventures and practical jokesfor which his memory is famous. He was born in the year 1670, atNobber, or, as some assert, at a neighbouring village, in the countyof Westmeath, and died at the age of 68, in the year 1738. Earlydeprived of his sight by the small-pox, the inhabitant of a countryrecently desolated by a civil war, anti, add to these his propensity todissipation, we must wonder at the proofs he has given of the depth andversatility of his talents. Some idea of the fertility of his invention may be formed from thiscircumstance, that one harper who attended the Belfitst meeting in 1792, arid who had neverseen Carolan, nor been taught by any person who had an opportunity of imitating him, hadacquired upwards of one hundred of his tunes, which, he asserted, constituted but an incon-siderable portion of them. As an instance of the fitcility with which he committed tunes tomemory, as well as of the astonishing ease with which he could produce new melodies, takethe following fact, vouched for by the Monthljj J?eview.t At the house of an Irish noble-man, where Geminiani was present, Carolan challenged that eminent composer to a trial ofskill. The musician played over on his violin the fifth concerto of Vivaldi. It was instantlyrepeated by Carolan on his harp, although lie had never heard it before. The surprise of thecompany was increased when lie asserted that lie would compose a concerto himself at themoment ; and tire niore so, when he actually played that admirable piece known ever sinceas Carolans Concerto. He composed, as one who knew him well reported, upon the buttons of his coat, taking them as representatives of the lines and spaces ; as Stanley, the blindorganist, used to compose on a slate with convex lines. Carolan was the first who departedfrom the purely Irish style in composition ; but, although lie delighted in the polished com-positions of the Italian and German school, with ivhicli style many of his airs are stronglytinctured, yet he felt the full excellence of the ancient music of his own country, and hasbeen heard to say that he would rather have been the author of Molly McAipine,b (a charm.ing original air, by OConnallon,) than of airy melody lie himself had ever composed. Yetit must be admitted that lie has produced some airs of surpassing tenderness, and of purelyIrish structure. Such, for instance, is his sweet and touching Bridget Cruise, c a(ldressedto a lady to whom he was tenderly but hopelessly attached. It is the only one remaining offifteen different pieces addressed by him to this lady. In connexion with this delightfulstrain, the reader will, of course, bear in mind tire well known anecdote of Carolan, when ona pilgrimage at Loch Derg, recognizing the object of his youthful affections by the touch ofher hand, in assisting Tier out of the ferry boat. his arrangement of the Fairy Queen, ais another of these admirable realizations of the true old idea of national melody. In thesanie class may be enumerated Rose Dillon, e afl(1 his Receipt for Drinking, the last,a Old Series, vol. lxxvii.b c S e These airs will all he found in tile Editors former collection.
issue Number
1
page Number
83
periodical Author
Edward Bunting
issue Publication Date
1840-01-01T00:00:00
allowedRoles
anonymous,guest,friend,member