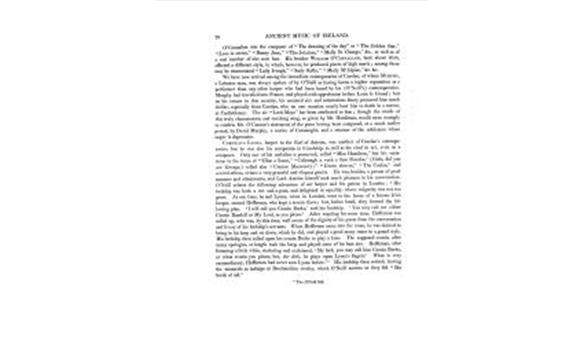 Previous | Next
Bunting - The Ancient Music of Ireland, Volume 1, Issue 1, Page 82
3 views
Favourite | Share | Feedback
periodical Publisher
Hodges & Smith, Dublin, 1840
periodical Editor
Edward Bunting
periodical Title
Bunting - The Ancient Music of Ireland
volume Number
1
issue Content
70 ANCIENT MUSIC OF IRELAND.()Connallon was the composer of The dawning of the day or The Golden Star,Love in secret, Bonny Jean, The Jointure, Molly St. George, &c., as well as ofa vast number of airs now lost. us brother WILLIAM OCONNALLON, born about 1645,affected a different style, in which, however, he produced pieces of high merit; among thesemay be enumerated Lady Iveagh, Saely Kelly, Molly MAlpine, &c. &c.We have now arrived among the immediate cotemporaries of Carolan, of whom MURPHY,a Leinster man, was always spoken of by ONeill as having borne a higher reputation as aperformer than any other harper who had been heard by his (ONeills) contemporaries.Murphy had travelled into Fraiice, and played with approbation before Louis le Grand; buton his return to this country, his assumed airs and ostentatious finery procured him muchdislike, especially from Carolan, who on one occasion nearly beat him to death in a tavern,at Castleblaney. The air Lord l\Iayo has been attributed to him ; though the words ofthis truly characteristic and touching song, as given by Mr. Hardiman, would seem stronglyto confirm Mr. OConnors statement of the piece having been composed, at a much earlierperiod, by David Murphy, a native of Connaught, and a retainer of the nobleman whoseanger it deprecates.CORNELIUS LyoNs, harper to the Earl of Antrim, was another of Carolans coteinpo-varies; but he was also his companion in friendship, as well as his rival in art, even as acomposer. Only one of his melodies is preserved, called Miss Hamilton, but his varia-tions to the tunes of Ellen a Roon, Callenagh a voch a thoo Sharsha, (Girls, (lid youse George,) called also Connor Macareavy ; Green sleeves, The Coolan, andseveral others, evince a very graceful and elegant genius. He was, besides, a person of goodmanners and attaimnents, and Lord Antrim himself took much pleasure in his conversation.ONeill relates the following adventure of our harper and his patron in London: Hislordship was both a wit and a poet, and delighted in equality, where vulgarity was not toogross. At one time, he and Lyons, when in Loiidoii, went to the house of a famous Irishharper, named Heffernan, who kept a tavern there; but, before hand, they formed the fol-lowing plan. I will call you Cousin Burke, said his lordship. You ma call me eitherCousin Randall or My Lord, as you please. After regaling for some time, Fleffernan wascalled up, who was, by this time, well aware of the dignity of his guest from the conversationand livery of his lordships servants. When Heffernan came into the room, he was desired tobring in his harp and sit down, which lie (lid, and played a good many tunes in a grand style.His lordship then called upon his cousin Burke to play a tune. The supposed cousin, aftermany apologies, at length took the harp, and played some of his best airs. Heffernan, afterlistening a little while, started up aiid exclaimed, My lord, you may call him Cousin Burke,or what cousin you please, but, dar thek, lie plays upon Lyonss fingers. What is veryextraordinary, Heffernan had never seen Lyons before. a His lordship then retired, leavingthe minstrels to indulge in Bacchanalian rivalry, which ONeill assures us they did likebards of old.a The ONeill MS.
issue Number
1
page Number
82
periodical Author
Edward Bunting
issue Publication Date
1840-01-01T00:00:00
allowedRoles
anonymous,guest,friend,member