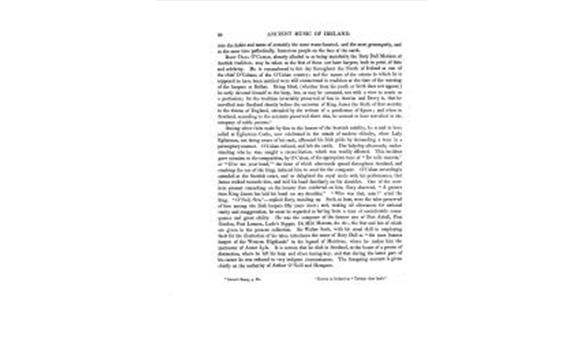 Previous | Next
Bunting - The Ancient Music of Ireland, Volume 1, Issue 1, Page 80
5 views
Favourite | Share | Feedback
periodical Publisher
Hodges & Smith, Dublin, 1840
periodical Editor
Edward Bunting
periodical Title
Bunting - The Ancient Music of Ireland
volume Number
1
issue Content
68 ANCIENT MUSIC OF IRELAND.into the habits and tastes of certainly the most warm-hearted, and the most grotesquely, andat the same time pathetically, humorous people on the face of the earth.RORY DALL OCAHAN, already alluded to as being manifestly the Rory Dall Morison ofScottish tradition, may be taken as the first of these our later harpers, both in point of dateand celebrity. He is remembered to this day throughout the North of Ireland as one ofthe chief OCahans, of the OCahan country; and the names of the estates to which he issupposed to have been entitled were still enumerated in tradition at the time of the meetingof the harpers at Belfast. Being blind, (whether from his youth or birth does not appear,)he early devoted himself to the harp, but, as may be surmised, not with a view to music asa profession; for the tradition invariably preserved of him in Antrirn and Derry is, that hetravelled into Scotland shortly before the accession of King James the Sixth of that countryto the throne of England, attended by the retinue of a gentleman of figure ; and when inScotland, according to the accounts preserved there also, he seemed to have travelled in the.company of noble persons.aAmong other visits made by liini to the houses of the Scottish nobility, lie is said to havecalled at Eglintouii Castle, now celebrated in the annals of modern chivalry, when LadyEglintoun, not being aware of his rank, affronted his Irish pride by demanding a tune in aperemptory manner. 0 Cahan refused, and left the castle. Tier ladyship afterwards, under-standing who he was, sought a reconciliation, which was readily effected. This incidentgave occasion to the composition, by 0 Cahan, of the appropriate tune of Da niihi malium,or Give me your hand, b the fame of which afterwards spread throughout Scotland, andreaching the ear of the king, induced him to scud for the composer. 0 Cahan accordinglyattended at the Scottish court, and so delighted the royal circle with his performance, thatJames walked towards him, and laid his hand familiarly on his shoulder. One of the cour-tiers present remarking on the honour thus conferred on him, Rory observed, A greaterthan King James has laid his hand on my shoulder. Who was that, man ! cried theking. ONeiI, Sire,replied Rory, standing up. Such, at least, were the tales preservedof him among the Irish harpers fifty years since; and, making all allowances for nationalvanity and exaggeration, he must be regarded as having been a man of considerable conse-quence .and great ability. He was the composer of the famous airs of Port Atholl, PortGordon, Port Lennox, Ludes Supper, Da Mihi Manum, &c. &c., the first and last of whichare given in the present collection. Sir Walter Scott, with his usual skill in employingfacts for the illustration of his tales, introduces the name of Rory Dali as the most famousharper of the Western Highlands in his legend of Montrose, where lie makes him theinstructor of Annot Lyle. It is certain that he died in Scotland, at the house of a person ofdistinction, where he left his harp and silver tuning-key, and that during the latter part ofhis career he was reduced to very indigent circumstances. The foregoing account is givenchiefly on the authority of Arthur ONeill auid Hempson.Gunns Essay, p. 95. Known in Ireland as Tabhair dom lamli.
issue Number
1
page Number
80
periodical Author
Edward Bunting
issue Publication Date
1840-01-01T00:00:00
allowedRoles
anonymous,guest,friend,member