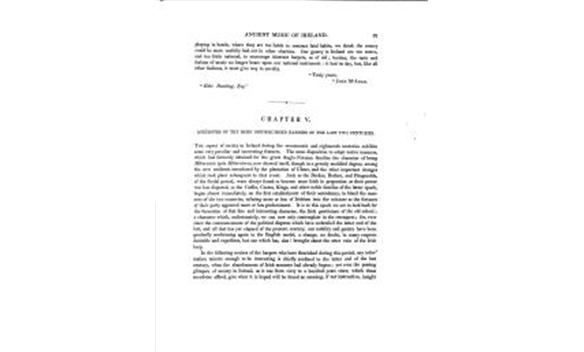 Previous | Next
Bunting - The Ancient Music of Ireland, Volume 1, Issue 1, Page 79
3 views
Favourite | Share | Feedback
periodical Publisher
Hodges & Smith, Dublin, 1840
periodical Editor
Edward Bunting
periodical Title
Bunting - The Ancient Music of Ireland
volume Number
1
issue Content
ANCIENT MUSIC OF IRELAND. 67playing in hotels, where they are too liable to contract fatal habits, we think the moneycould be more usefully laid out in other charities. Our gentry in Ireland are too scarce,and too little national, to encourage itinerant harpers, as of old ; besides, the taste andfashion of music no longer bears upon our national instrument: it had its day, but, like allother fashions, it must give way to novelty.Truly yours,JOHN MADAM.Edw. Bunting, Esq.CHAPTER V.ANECDOTES OF THE MORE DISTINGUISHED HARPERS OF THE LAST TWO CENTURIES.THE aspect of society in Ireland during the seventeenth and eighteenth centuries exhibitssome very peculiar and interesting features. The same disposition to adopt native manners,which had formerly obtained for the great Anglo-Norman families the character of beingHThernicis ipsis Hiberniores, now shewed itself, though in a greatly modified degree, amongthe new residents introduced by the plantation of Ulster, and the other important changeswhich took place subsequent to that event. And, as the Burkes, Butlers, and Fitzgeralds,of the feudal period, were always found to become more Irish in proportion as their powerwas less disputed, so the Cuffes, Cootes, Kings, and other noble families of the latter epoch,began almost immediately, on the first establishment of their ascendancy, to blend the man-riers of the two countries, infusing more or less of Irishism into the mixture as the fortunesof their party appeared more or less predominant. It is to this epoch we are to look back forthe formation of that fine and interesting character, the Irish gentleman of the old schoola character which, unfortunately, we can now only contemplate in the retrospect; for, eversince the commencement of the political disputes which have embroiled the latter end of thelast, and all that has yet elapsed of the present, century, our nobility and gentry have beengradually conforming again to the English model, a change, no doubt, in many respectsdesirable and expedient, but one which has, alas! brought about the utter ruin of the Irishharp.In the following notices of the harpers who have flourished during this period, any infor- mation minute enough to be interesting is chiefly confined to the latter end of the lastcentury, when the abandonment of Irish manners had already begun; yet even the passingglimpses of society in Ireland, as it was from sixty to a hundred years since, which theseanecdotes afford, give what it is hoped will be found an amusing, if not instructive, insight
issue Number
1
page Number
79
periodical Author
Edward Bunting
issue Publication Date
1840-01-01T00:00:00
allowedRoles
anonymous,guest,friend,member