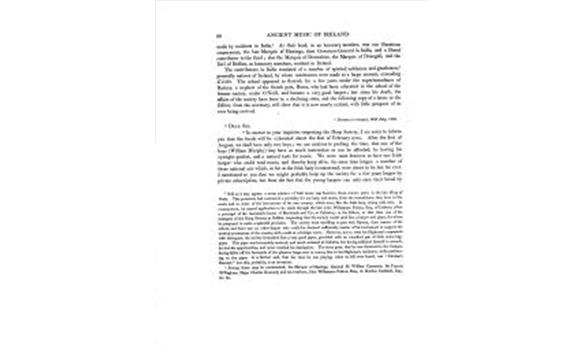 Previous | Next
Bunting - The Ancient Music of Ireland, Volume 1, Issue 1, Page 78
3 views
Favourite | Share | Feedback
periodical Publisher
Hodges & Smith, Dublin, 1840
periodical Editor
Edward Bunting
periodical Title
Bunting - The Ancient Music of Ireland
volume Number
1
issue Content
66 ANCIENT MUSIC OF IRELAND.made by residents in India. At their head, as an honorary member, was our illustriouscountryman, the late Marquis of Hastings, then Governor-General in In 1ia, and a liberalcontributor to the fund; also the Marquis of Downshire, the Marquis of Donegall, and theEarl of Belfast, as honorary members, resident in Ireland.The contributors in India consisted of a tiumber of spirited noblemen and gentlemen,bgenerally natives of Ireland, by whom remittances were made to a large amount, exceeding1100. The school appeared to flourish for a few years under the superintendance ofRainey, a nephew of the Scotch poet, Burns, who had been educated in the school of theformer society, under ONeill, and became a very good harper; but since his death, theaffairs of the society have been in a declining state, and the following copy of a letter to theEditor, from the secretary, will shew that it is now nearly extinct, with little prospect of itsever being ,revived.DONEGALL-STREET, 30th July, 1839.DEAR S ia,In answer to your inquiries respecting the Harp Society, I am sorry to informyou that the funds will be exhausted about the first of February next. After the first ofAugust, we shall have only two boys; we are anxious to prolong the time, that one of theboys (William Murphy) may have as much instruction as can be afforded, he having hiseyesight perfect, and a natural taste for music. We were most desirous to have one Irishharper who could read music, and thereby keep alive, for some time longer, a number ofthose national airs which, so far as the Irish harp is concerned, were about to be lost for ever.I mentioned to you that we might probably keep up the society for a few years longer byprivate subscription, but from the fact that the young harpers can only earn their bread bya Odd as it may appear, a warm admirer of Irish music w found in those remote parts, in the late King fOude. This potentate had contracted a partiality for our harp and music, from the resemblance they bore to themusic and to sonie of the instruments of his own country, which were, like the Irish harp, strung with wire. Inconsequence, he caused application to be made through the late John Williamson Fulton, Esq., of Lisburii, (thena principal of the mercantile house of Macintosh and Co., at Calcutta,) to the Editor, at that time one of themanagers of the Harp Society at Belfast, requesting that the society would send him a harper and piper, for whomhe purposed to make a splendid provision. The society were unwilling to part with Rainey, then master of theschool, and there was no other harper who could be deemed sufficiently master of his instrument to support themusical pretensions of the country with credit at a foreign court. However, not to treat his Highnesss commandswith disrespect, the society forwarded him a very good piper, provided with an excellent pair of Irish union bag-pipes. This piper was honourably received, and much caressed at Calcutta, but having addicted himself to arrack,he lost his opportunities, and never reached his destination. The story goes, that he was drowned in the Ganges,having fallen oft the forecastle of the pleasure barge sent to convey him to his Highnesss residence, while perform-ing on the pipes. It is farther said, that the tune he was playing, when he fell over board, was CarolansReceipt ; but this, probably, is an invention.Among these may be enumerated, the Marquis of Hastings, General Sir William Casement, Sir FrancisMNaghten, Major Charles Kennedy and his brothers, John Williamson Fulton, Esq., A. Gordon Caulfield, Esq.,&C. &c.
issue Number
1
page Number
78
periodical Author
Edward Bunting
issue Publication Date
1840-01-01T00:00:00
allowedRoles
anonymous,guest,friend,member