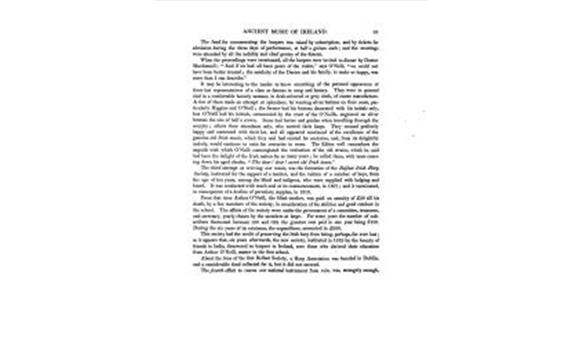 Previous | Next
Bunting - The Ancient Music of Ireland, Volume 1, Issue 1, Page 77
3 views
Favourite | Share | Feedback
periodical Publisher
Hodges & Smith, Dublin, 1840
periodical Editor
Edward Bunting
periodical Title
Bunting - The Ancient Music of Ireland
volume Number
1
issue Content
ANCIENT MUSIC OF IRELAND. 65The fund for remunerating the harpers was raised by subscription, and by tickets foradmission during the three days of performance, at half a guinea each; and the meetingswere attended by all the nobility and chief gentry of the district.When the proceedings were terminated, all the harpers were invited to dinner by DoctorMacdonnell; And if we had all been peers of the realm, says ONeill, we could nothave been better treated; the assiduity of the Doctor and his family, to make us happy, wasmore than I can describe.It may be interesting to the reader to know something of the personal appearance ofthese last representatives of a class so famous in song and history. They were in generalclad in a comfortable homely manner, in drab-coloured or grey cloth, of coarse manufacture.A few of them made an attempt at splendour, by wearing silver buttons on their coats, par-ticularly Higgins and ONeill; the former had his buttons decorated with his initials only,but ONeill had his initials, surmounted by the crest of the ONeilIs, engraved on silverbuttons the size of half a crown. Some had horses and guides when travelling through thecountry ; others their attendants only, who carried their harps. They seemed perfectlyhappy and contented with their lot, and all appeared convinced of the excellence of thegenuine old Irish music, which they said had existed for centuries, and, from its delightfulmelody, would continue to exist for centuries to come. The Editor well remembers theanguish with which ONeill contemplated the extinction of the old strains, which he saidhad been the delight of the Irish nation for so many years; he called them, with tears cours-ing down his aged cheeks, The dear! dear! sweet old Irish tunes.The third attempt at reviving our music, was the formation of the Belfast Irish HarpSociety, instituted for the support of a teacher, and the tuition of a number of boys, fromthe age of ten years, among the blind and indigent, who were supplied with lodging andboard. It was conducted with much zeal at its commencement, in 1807; and it terminated,in consequence of a decline of pecuniary supplies, in 1813.From that time Arthur ONeill, the blind teacher, was paid an annuity of 30 till hisdeath, by a few members of the society, in consideration of his abilities and good conduct inthe school. The affairs of the society were under the government of a committee, treasurer,and secretary, yearly chosen by the members at large. For some years the number of sub-scribers fluctuated between 100 and 120, the greatest sum paid in one year being Th0.During the six years of its existence, the expenditure, amounted to 950.This society had the credit of preserving the Irish harp from being, perhaps, for ever lost;as it appears that, six years afterwards, the new society, instituted in 1819 by the bounty offriends in India, discovered no harpers in Ireland, save those who derived their educationfrom Arthur ONeill, master in the first school.About the time of the first Belfast Society, a Harp Association was founded in Dublin,and a considerable fund collected for it, but it did not succeed.The fourth effort to rescue our national instrument from ruin, was, strangely enough,
issue Number
1
page Number
77
periodical Author
Edward Bunting
issue Publication Date
1840-01-01T00:00:00
allowedRoles
anonymous,guest,friend,member