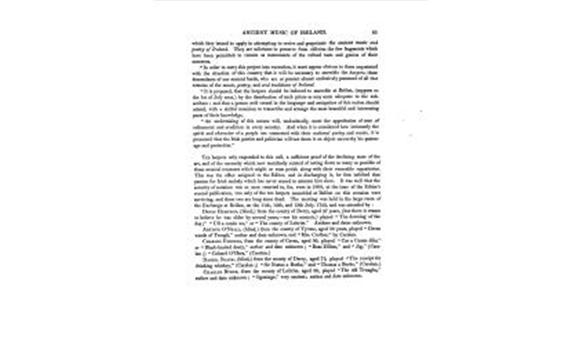 Previous | Next
Bunting - The Ancient Music of Ireland, Volume 1, Issue 1, Page 75
17 views
Favourite | Share | Feedback
periodical Publisher
Hodges & Smith, Dublin, 1840
periodical Editor
Edward Bunting
periodical Title
Bunting - The Ancient Music of Ireland
volume Number
1
issue Content
ANCIENT MUSIC OF IRELANI . 63which they intend to apply in attempting to revive and perpetuate tile ancient music andpoetry of Ireland. They are solicitous to preserve from oblivion the few fragments whichhave been permitted to remain as monuments of the refined taste and genius of theirancestors.In order to carry this project into execution, it must appear obvious to those acquaintedwith the situation of this country that it will be necessary to assemble the harpers, thosedescendants of our ancient bards, who are at present almost exclusively possessed of all thatremains of the music, poetry, and oral traditions of Ireland.It is proposed, that the harpers should be induced to assemble at Belfast, (suppose onthe 1st of July next,) by the distribution of such prizes as may seem adequate to the sub-scribers; and that a person well versed in the language and antiquities of this nation shouldattend, with a skilful musician to transcribe and arrange the most beautiful and interestingparts of their knowledge.An undertaking of this nature will, undoubtedly, meet the approbation of men ofrefinement and erudition in every country. And when it is considered how intimately thespirit and character of a people are connected with their national poetry and music, it ispresumed that the Irish patriot and politician will not deem it an object unworthy his patron-age and protection.Ten harpers only responded to this call, a sufficient proof of the declining state of theart, and of the necessity which now manifestly existed of noting down as many as possible ofthose musical treasures which might so soon perish along with their venerable repositories.This was the office assigned to the Editor, and in discharging it, he first imbibed thatpassion for Irish melody which has never ceased to animate him since. It was well that thesecurity of notation was so soon resorted to, for, even in 1809, at the time of the Editorssecond publication, two only of the ten harpers assembled at Belfast on this occasion weresurviving, and these two are long since dead. The meeting was held in the large room ofthe Exchange at Belfast, on the 11th, 12th, and 13th July, 1792, and was attended byDENIS HEMPSON, (blind,) from the county of Derry, aged 97 years, (but there is reasonto believe he was older by several years,_see his memoir,) played The dawning of theday; UI! a condo wo, or The county of Leitrim. Authors and dates unknown.ARTHUR ONEILL, (blind,) from the county of Tyrone, aged 58 years, played Greenwoods of Truagh, author and date unknown, and Mrs. Crofton, by Carolan.CHARLES FANNING, from the county of Cavan, aged 56, played Car a Ceann dilis,or Black-headed deary, author and date unknown; Rose Dillon, and Jig, (Caro-lan;) Colonel OIiara, (Carolan.)DANIEL BLACK, (blind,) from the county of Derry, aged 75, played The receipt fordrinking whiskey, (Carolan 😉 Sir Festus a Burke, and Thomas a Burke, (Carolan.)CHARLES BYRNE, from the county of Leitrim, aged 80, played The old rrruagha, 7author and date unknown; Oganioge, very ancient; author and date unknown.
issue Number
1
page Number
75
periodical Author
Edward Bunting
issue Publication Date
1840-01-01T00:00:00
allowedRoles
anonymous,guest,friend,member