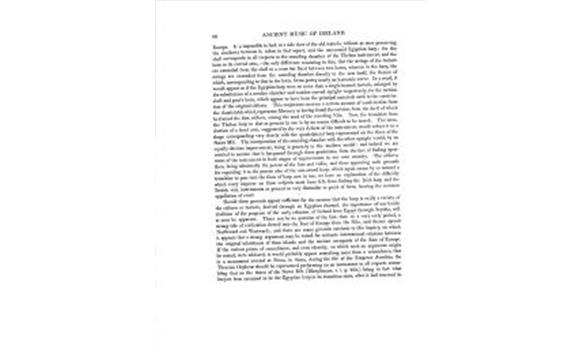 Previous | Next
Bunting - The Ancient Music of Ireland, Volume 1, Issue 1, Page 62
6 views
Favourite | Share | Feedback
periodical Publisher
Hodges & Smith, Dublin, 1840
periodical Editor
Edward Bunting
periodical Title
Bunting - The Ancient Music of Ireland
volume Number
1
issue Content
50 ANCIENT MUSIC OF IRELAND.Europe. It is impossible to look at a side view of the old testudo, without at once perceivingthe similarity between it, taken in that aspect, and the one-armed Egyptian harp; for theshell corresponds in all respects to the sounding chamber of the Tliebaim instrument, and thehorn to its curved arm,the only difference consisting in this, that the strings of the testudoare extended from the shell to a cross bar fixed between two horns, whereas in the harp, thestrings are extended from the sounding chamber directly to the arm itself, the fiexure ofwhich, corresponding to that in the horn, forms pretty nearly an harmonic curve. In a word, itwould appear as if the Egyptian harp were no more than a single-horned testudo, enlarged bythe substitution of a wooden chamber and wooden curved upright respectively, for the tortoiseshell and goats horn, which appear to have been the principal materials used in the construc-tion of the original cit hara. rFI is conjecture receives a certain amount of confirmation fromthe classi fable whic1i representS Mercury as having found the tortoise, from the shell of whichhe framed the first citliara, among the mud of the receding Nile. Now, the trmms tion fromthe Theban harp to that at present in use is by no means difficult to be traced. The intro-duction of a front arm, suggested by the very defects of the instrument, would reduce it to ashape correspondii g very closely with the quadrilateral harp represented on the flieca of theStowe MS. The incorporation of the sounding chamber with the other upright would, by anequally obvious improvement bring it precis2ly to the modern model: and indeed we areentitled to assume that it has passed through these gradations, from the fact of finding speci-mens of the instrument in both stages of improvement in our own country. The cit hare,then, being admittedly the parent of the lute amid violin, and there appearing such groundsfbr regarding it as the parent also of time one-armed harp, which again seems by so natural atransition to pass into the form of harp now in use, we have an explanation of the difficultywhich every inquirer on these subjects must have felt, from finding the Irish harp am l theBritish viol, instruments at present so very dissimilar in point of form, bearing the commonappellation of cruit.Should these grounds appear sufficient for the surmise that the harp is really a variety ofthe citliara or testudo, derived through an Egyptian channel, the importance of our bardietradition of the progress of the early colonists of Ireland from Egypt through Scythia, willat once be apparent. There can be no question of the fact, that, at a very early period, astrong tide of civilization flowed into the East of Europe from the Nile, and. thence spreadNorthward and Westward; and there are many grounds extrinsic to this inquiry, on whichit appears that a strong argument may be raised for intimate international relations betweenthe original inhabitants of these islands and the ancient occupants of the East of Europe.If the various points of resemblance, and even identity, on which such an argument mightbe rested, were adduced, it would probably appear something more than a coincidence, thatin a monument erected at Petau, in Stiria, during the life of the Emperor Aurelius, theThracian Orpheus should be represented performing on an instrument in all respects resem-bling that on the tizeca of the Stowe MS. ( T$iontfau con, v. i. p. 252,) being in fact whathas just been surmised to be the Egyptian harp in its transition state, after it had received its
issue Number
1
page Number
62
periodical Author
Edward Bunting
issue Publication Date
1840-01-01T00:00:00
allowedRoles
anonymous,guest,friend,member