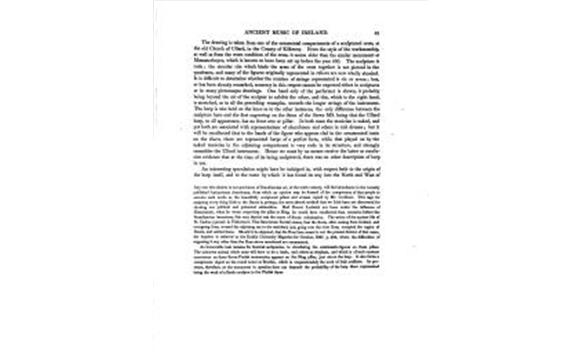 Previous | Next
Bunting - The Ancient Music of Ireland, Volume 1, Issue 1, Page 61
6 views
Favourite | Share | Feedback
periodical Publisher
Hodges & Smith, Dublin, 1840
periodical Editor
Edward Bunting
periodical Title
Bunting - The Ancient Music of Ireland
volume Number
1
issue Content
ANCIENT MUSIC OF IRELAND. 49The drawing is taken from one of the ornamental compartments of a sculptured cross, atthe old Church of Ullard, in the County of Kilkemiy. From the style of the workmanship,as well as from the worn condition of the cross, it seems older than the similar monument atMonasterboyce, which is known to have been set up before the year 830. The sculpture isrude ; the circular rim which binds the arms of the cross together is not pierced in thequadrants, and many of the figures originally represented in relievo are now wholly abraded.It is difficult to determine whether the number of strings represented is six or seven; but,as has been already remarked, accuracy in this respect cannot be expected either in sculpturesor in many picturesque drawings. One hand only of the performer is shown, it probablybeing beyond the art of the sculptor to exhibit the other, and this, which is the right hand,is stretched, as in all the preceding examples, towards the longer strings of the instrument.The harp is also held on the knee as in the other instances, the only difference between thesculpture here and the first engraving on the tileca of the Stowe MS. being that the Ullardharp, to all appearance, has no front arm or pillar. In both cases the musician is naked, andyet both are associated with representations of churchmen and others in rich dresses; but itwill be recollected that in the hands of the figure who appears clad in the ornamented tunicon the theca, there are represented harps of a perfect form, while that played on by thenaked musician in the adjoining compartment is very rude in its structure, and stronglyresembles the Ullard. instrument. Hence we must by no means receive the latter as conclu-sive evidence that at the time of its being sculptured, there was no other description of harpin use.An interesting speculation might here be indulged in, with respect both to the origin ofthe harp itself, and to the route by which it has found its way into the North and West ofAny one who desires to see specimens of Scandinavian art, of the tenth century, will find abundance in the recentlypublished Antiquitates American , from which an opinion may be formed of the competency of that people toexecute such works as the beautifully sculptured pillars and crosses copied by Mr. Cordiner. This rage forassigning every thing Irish to the Danes is, perhaps, the most absurd method that we Irish have yet discovered forshowing our political and polemical animosities. Had Doctor Ledwich not been under the influence of.Danomania, when he wrote respecting the pillar at Nieg, he would have recollected that, centuries before theScandinavian incursions, this very district was the scene of Scotic colonization. The writer of the ancient life ofSt. Cadroe (quoted in Pinkertons Vitm Sanctorum Scotia) states, that the Scots, after coming from Ireland, andoccupying Iona, crossed the adjoining sea to the mainland, and, going over the river Ross, occupied the region ofRossia, and settled there. Should it be objected, that the Ross here meant is not the present district of that name,the inquirer is referred to the Dublin University Magazine for October, 1837, p. 434, where the difficulties ofsupposing it any other than the Ross above mentioned are enumerated.Au honourable task remains for Scottish antiquaries, in elucidating the emblematic figures on these pillars.The unknown animal, which some will have to be a lamb, and others an elephant, and which is of such constantoccurrence on these Scoto-Pictish monuments, appears on the Nieg pillar, just above the harp. It also forms aconspicuous object on the round tower at Brechin, which is unquestionably the work of Irlsh artificers. Its pre-sence, therefore, on the monument in question does not impeach the probability of the harp there representedbeing the work of a Seotic sculptor in the Pictish times.
issue Number
1
page Number
61
periodical Author
Edward Bunting
issue Publication Date
1840-01-01T00:00:00
allowedRoles
anonymous,guest,friend,member