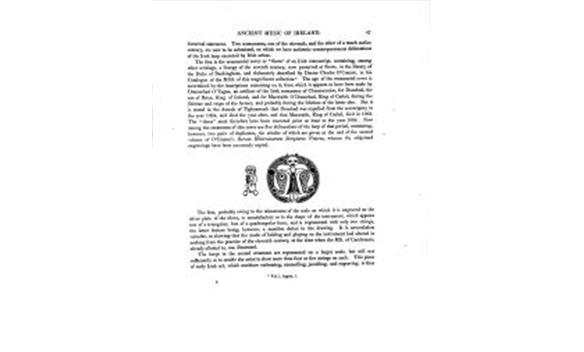 Previous | Next
Bunting - The Ancient Music of Ireland, Volume 1, Issue 1, Page 59
3 views
Favourite | Share | Feedback
periodical Publisher
Hodges & Smith, Dublin, 1840
periodical Editor
Edward Bunting
periodical Title
Bunting - The Ancient Music of Ireland
volume Number
1
issue Content
ANCIENT MUSIC OF IRELAND.47historical statement. Two monuments, one of the eleventh, and the other of a much earliercentury, are now to be submitted, on which we have authentic contemporaneous delineationsof the Irish harp executed by Irish artists.The first is the ornamental cover or theca of an Irish manuscript, containing, amongother writings, a liturgy of the seventh century, now preserved at Stowe, in the library ofthe Duke of Buckingham, and elaborately described by Doctor Charles OConnor, in hisCatalogue of the MSS. of this magnificent collection. The age of the ornamental cover isascertained by the inscriptions remaining on it, from which it appears to have been made byDonnachad 0 Tagan, an artificer of the Irish monastery of Clonmacnoise, for Donchad, theson of Brian, King of Ireland, and for Maccraith ODonnchad, King of Cashel, during thelifetime and reign of the former, and probably during the lifetime of the latter also. But itis stated in the Annals of Tighearnach that Donchad was expelled from the sovereignty inthe year 1064, and died the year after, and that Maccraith, King of Cashel, died in 1052.The theca must therefore have been executed prior at least to the year 1064. Nowamong the ornaments of this cover are five delineations of the harp of that period, coi taining,however, two p irs of duplicates, fac similes of which are given at the end of the secondvolume of OConnors Rerum Hibernicarum Scriptores Veteres, whence the subjoinedengravings have been accurately copied.IThe first, probably owing to the minuteness of the scale on which it is engraved on thesilver plate of the theca, is unsatisfactory as to the shape of the instrument, which appearsnot of a triangular, but of a quadrangular form, and is represented with only two strings,the latter feature being, however, a manifest defect in the drawing. It is neverthelessvaluable, as showing that the mode of holding and playing on the instrument had altered innothing from the practice of the eleventh century, at the time when the MS. of Cambrensis,already alluded to, was illustrated.The harps in the second ornament are represented on a larger scale, but still notsufficiently so to enable the artist to show more than four or five strings on each. This pieceof early Irish art, which combines embossing, enamelling, jewelling, and engravings is thusVol. i. Appen. i.
issue Number
1
page Number
59
periodical Author
Edward Bunting
issue Publication Date
1840-01-01T00:00:00
allowedRoles
anonymous,guest,friend,member