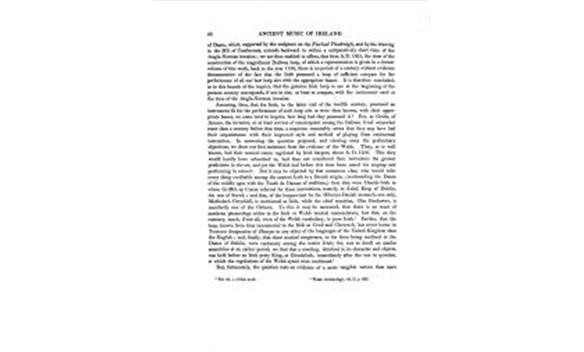 Previous | Next
Bunting - The Ancient Music of Ireland, Volume 1, Issue 1, Page 58
4 views
Favourite | Share | Feedback
periodical Publisher
Hodges & Smith, Dublin, 1840
periodical Editor
Edward Bunting
periodical Title
Bunting - The Ancient Music of Ireland
volume Number
1
issue Content
46 ANCIENT MUSIC OF IRELAND.of Dante, which, supported by the sculpture on the Fiac,lail Phadruigh, and by the drawingin the MS. of Cambrensis, extends backward to within a coiiiparatively short time of theAnglo-Norman invasion; we are thus enabled to affirm, that from A.D. 1621, the time of theconstruction of the magnificent Dallway harp, of which a representation is given n a formervolume of this work, back to the year 1180, there is no period of a century without evidencedemonstrative of the fact that the Irish possessed a harp of sufficient compass for theperformance of all our best harp airs with the appropriate basses. It is therefore concluded,as to this branch of the inquiry, that the genuine Irish harp in use at the beginning of thepresent century corresponds, if not in size, at least in compass, with the instrument used atthe time of the Anglo-Norman invasion.Assuming, then, that the Irish, in the latter end of the twelfth century, possessed aninstrument fit for the performance of such harp airs as were then known, with their appro-priate basses, we come next to inquire, how long had they possessed it? For, a s Guido, ofArezzo, the inventor, or at least revivor of counterpoint among the Italians, lived samewhatmore than a century before that time, a suspicion reasonably arises that they may have hadtheir acquaintance with their improved style and method of playing from continentalinstruction. In answering the question proposed, and clearing away the preliminaryobjections, we draw our first assistance from the evidence of the Welsh. They, as is wellknown, had their musical canon regulated by Irish harpers, about A. D. 1100. This theywould hardly have submitted to, had they not considered their instructors the greaterproficients in the art, and yet the Welsh had before this time been noted for singing andperforming in concert. But it may be objected by that numerous class, who would referevery thing creditable among the ancient Irish to a Danish origin, (confounding the Danesof the middle ages with the Tuath de Danans of tradition,) that they were Danish-Irish towhom Griffith ap Conan referred for these instructions, namely, to Aulaf, King of Dublin,the son of Sitrick; and that, of the harpers sent by the Hiberno-Danish monarch, one only,Mathuloch Gwyddell, is mentioned as Irish, while the chief musician, Olar Gerdawwr, ismanifestly one of the Ostmen. To this it may be answered, that there is no trace ofnorthern phraseology either in the Irish or Welsh musical nomenclature, but that, on thecontrary, much, if not all, even of the Welsh vocabulary, is pure Irish.a Farther, that theharp, known from time immemorial to the Irish as Cruit and Clarseach, has never borne itsTeutonic designation of Hearpa in any other of the languages of the United Kingdom thanthe English; and, finally, that these musical congresses, so far from being confined to theDanes of Dublin, were customary among the native Irish; for, not to dwell on similarassemblies at an earlier period, we find that a meeting, identical in its character and objects,was held before an Irish petty King, at Glendaloch, immediately after the one in question,at which the regulations of the Welsh synod were confirmed.bBut, fortunately, the question rests on evidence of a more tangible nature than mereSee vol. i. of this work. b Welsh Archeology, vol. iii. p. 625.
issue Number
1
page Number
58
periodical Author
Edward Bunting
issue Publication Date
1840-01-01T00:00:00
allowedRoles
anonymous,guest,friend,member