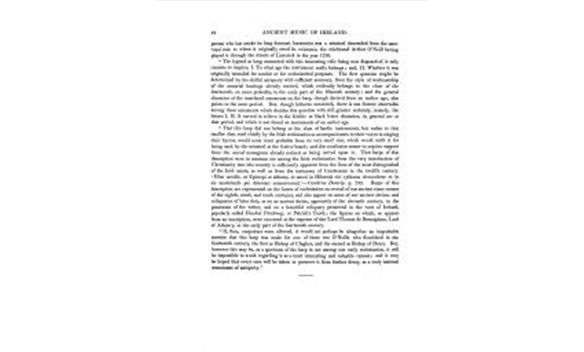 Previous | Next
Bunting - The Ancient Music of Ireland, Volume 1, Issue 1, Page 52
3 views
Favourite | Share | Feedback
periodical Publisher
Hodges & Smith, Dublin, 1840
periodical Editor
Edward Bunting
periodical Title
Bunting - The Ancient Music of Ireland
volume Number
1
issue Content
42 ANCIENT MUSIC OF IRELAND.person who last awoke its long dormant harmonies was a minstrel descended from the sameroyal race to whom it originally owed its existence, the elebrated Arthur ONeill havingplayed it through the streets of Limerick in the year 1760.The legend so long connected with this interesting relic being now disposed of, it onlyremains to inquire, I. To what age the instrument really belongs; and, II. Whether it wasoriginally intended for secular or for ecclesiastical purposes. The first question might bedetermined by the skilful antiquary with sufficient accuracy, from the style of workmanshipof the armorial bearings already noticed, which evidently belongs to the close of thefourteenth, or, more probably, to the early part of the fifteenth century; and the generalcharacter of the interlaced ornaments on the harp, though derived from an earlier age, alsopoints to the same period. But, though hitherto unnoticed, there is one feature observableamong those ornaments which decides this question with still greater certainty, namely, theletters I. H. S. carved in relievo in the Gothic or black letter character, in, g nera1 use atthat period, and which is not found on monuments of an earlier age.That this harp did not belong to the class of bardic instruments, but rather to thatsmaller class used chiefly by the Irish ecclesiastics as accompaniments to their voices in singingtheir hymns, would seem most probable from its very small size, which would unfit it forbeing used by the minstrel at the festive board; and this conclusion seems to acquire supportfrom the sacred monogram already noticed as being carved upon it. That harps of thisdescription were in common use among the Irish ecciesiastics from the very introduction ofChristianity into this country is sufficiently apparent from the lives of the most distinguishedof the Irish saints, as well as from the testimony of Cambrensis in the twelfth century.line accidit, ut Episcopi et abbates, et sancti in Hiberni yin cytharas circumferre et ineis modulando pie delectari consueverunt.Gambrie Descrip. p. 739. Harps of thisdescription are represented on the knees of ecclesiastics on several of our ancient stone crossesof the eighth, ninth, and tenth centuries, and also appear on some of our ancient shrines andreliquaries of later date, as on an ancient shrine, apparently of the eleventh century, in thepossession of the writer, and on a beautiful reliquary preserved in the west of Ireland,popularly called Fiaclial Phadruig, or Patricks Tooth; the figures on which, as appearsfrom an inscription, were executed at the expense of the Lord Thomas de Bramigham, Lordof Athenry, in the early part of the fourteenth century.If, then, conjecture were allowed, it would not perhaps be altogether an improbablesurmise that this harp was made for one of those two ONeihIs who fidurished in thefourteenth century, the first as Bishop of Clogher, and the second as Bishop of Derry. But,however this may be, as a specimen of the harp in use among our early ecciesiastics, it willbe impossible to avoid regarding it as a most interesting and valuable remain; and it maybe hoped that every care will be taken to preserve it from further decay, as a truly nationalmonument of antiquity.
issue Number
1
page Number
52
periodical Author
Edward Bunting
issue Publication Date
1840-01-01T00:00:00
allowedRoles
anonymous,guest,friend,member