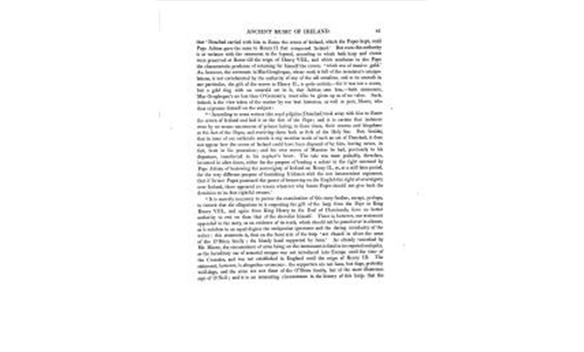 Previous | Next
Bunting - The Ancient Music of Ireland, Volume 1, Issue 1, Page 51
8 views
Favourite | Share | Feedback
periodical Publisher
Hodges & Smith, Dublin, 1840
periodical Editor
Edward Bunting
periodical Title
Bunting - The Ancient Music of Ireland
volume Number
1
issue Content
ANCiENT MUSIC OF IRELAND. 41that Donchad carried with him to Rome the crown of Ireland, which the Popes kept, untilPope Adrian gave the same to Henry II. that conq iered Ireland. But even this authorityis at variance with the statement in the legend, according to which both harp and crownwere preserved at Rome till the reign of Henry VIII., aiul which attributes to the Popethe characteristic prudence of retaining for himself the crown, which was of massive gold.As, however, the averment in Mac Geoghegan, whose work is full of the translators interpo-lations, is not corroborated by the authority of any of the old annalists, and as its untruth inone particular, the gift of the crown to Henry II., is quite certain,for it was not a crown,but a gold ring with an emerald set in it, that Adrian sent him,both statements,Mac Geoghegans no less than OGormans, must alike be given up as of no value. Such,indeed, is the view taken of the matter by our best historian, as well as poet, Moore, whothus expresses himself on the subjectAccording to some writers this royal pilgrim (Donchad) took away with him to Romethe crown of Ireland and laid it at the feet of the Pope ; and it is certain that instanceswere by no means uncommon of princes laying, in those times, their crowiis and kingdomsat the feet of the Popes, and receiving them back as ficfs of the holy See. But, besidethat in none of our authentic annals is any mention made of such an act of Donchad, it doesnot appear how the crown of Ireland could have been disposed of by him, having never, infact, been in his possession; and his own crown of Munster he had, previously to hisdeparture, transferred to his nephews brow. The tale was most probably, therefore,invented in after times, either for the purpose of lending a colour to the right assumed byPope Adrian of bestowing the sovereignty of Ireland on Flenry II., or, at a still later period,for the very different purpose of furnishing Irishmen with the not inconvenient argument,that if former Popes possessed the power of bestowing on the English the right of sovereigntyover Ireland, there appeared no reason whatever why future Popes should not give back thedominion to its first rightful owners.It is scarcely necessary to pursue the examination of this story further, except, perhaps,to remark that the allegations in it respecting the gift of the harp from the Pope to KingHenry VIII., and again from King Henry to the Earl of Clanricarde, have no betterauthority to rest on than that of the chevalier himself. There is, however, one statementappended to the story, as an evidence of its truth, which should not be passed over in silence,as it exhibits in an equal degree the antiquarian ignorance and the daring mendacity of thewriter : this statement is, that on the front arm of the harp are chased in silver the armsof the OBrien family ; the bloody hand supported by lions. As already remarked byMr. Moore, the circumstance of arms being on the instrument is fatal to its reputed antiquity,as the hereditary use of armorial ensigns was not introduced into Europe until the time ofthe Crusades, and was not established in England until the reign of Henry III. Thestatement, however, is altogether erroneous: the supporters are not lions, but dogs, probablywolf-dogs, and the arms are not those of the OBrien family, but of the more illustrioussept of ONeil ; and it is an interesting circumstance in the history of this harp, that the
issue Number
1
page Number
51
periodical Author
Edward Bunting
issue Publication Date
1840-01-01T00:00:00
allowedRoles
anonymous,guest,friend,member