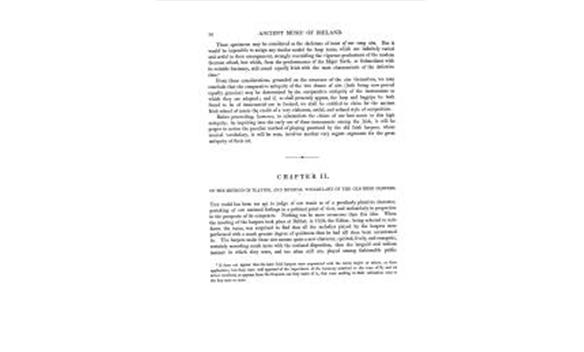 Previous | Next
Bunting - The Ancient Music of Ireland, Volume 1, Issue 1, Page 24
16 views
Favourite | Share | Feedback
periodical Publisher
Hodges & Smith, Dublin, 1840
periodical Editor
Edward Bunting
periodical Title
Bunting - The Ancient Music of Ireland
volume Number
1
issue Content
18 ANCIENT MUSIC OF IRELAND.These specimens may be considered as the skeletons of most of our song airs. But itwould be impossible to assign any similar model for harp tunes, which are infinitely variedand artful in their arrangement, strongly resembling the vigorous productions of the modernGerman school, but which, from the predominance of the Major Sixth, or Submediant withits suitable harmony, still sound equally Irish with the most characteristic of the defectiveclass.aFrom these considerations, grounded on the structure of the airs themselves, we mayconclude that the comparative antiquity of the two classes of airs (both being now provedequally genuine) may be determined by time comparative antiquity of the instruments towhich they are adapted; and if, as shall presently appear, the harp and. bagpipe be bothfound to be of immemorial use in Ireland, we shall be entitled to claim for the ancientIrish school of music th credit of a very elaborate, artful, and refined style of composition.Before proceeding, however, to substantiate the claims of our best music to this highantiquity, by inquiring into the early use of these instruments among the Irish, it will beproper to notice the peculiar method of playing practised by the old Irish harpers, whosemusical vocabulary, it will be seen, involves another very cogent argument for the greatantiquity of their art.CIIAPTER II.OF THE METHOD OF PLAYING, AND MUSICAL VOCABULARY OF THE OLD IRISh HARPERS.TImE world has been too apt to judge of our music as of a peculiarly plaintive character,partaking of our national feelings in a political point of view, and melancholy in proportionto the prospects of its composers. Nothing can be more erroneous than this idea. Whenthe meeting of the harpers took place at Belfast, in 1792, the Editor, being selected to notedown the tunes, was surprised to find that all the melodies played by the harpers wereperformed with a much greater degree of quickness than he had till then been accustomedto. The harpers made those airs assume quite a new character, spirited, lively, and energetic,certainly according much more with the national disposition, than the languid and tediousmanner in which they were, and too often still are, played among fashionable publica It does not appear that the later Irish harpers were acquainted with the terms major or minor, or theirapplication; but they were well apprised of the importance of the harmony attached to the tone of E, and itsminor conchord, as appears from the frequent use they made of it, this tone ranking in their estimation next tothe key note or tonic.
issue Number
1
page Number
24
periodical Author
Edward Bunting
issue Publication Date
1840-01-01T00:00:00
allowedRoles
anonymous,guest,friend,member