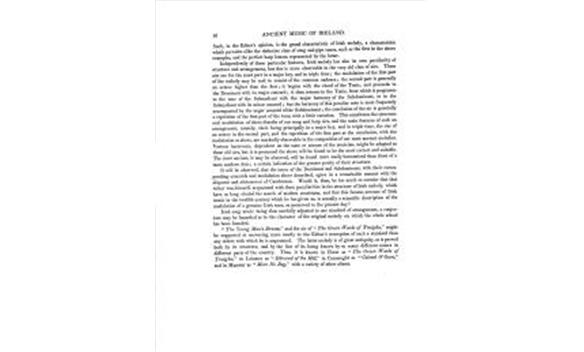 Previous | Next
Bunting - The Ancient Music of Ireland, Volume 1, Issue 1, Page 22
17 views
Favourite | Share | Feedback
periodical Publisher
Hodges & Smith, Dublin, 1840
periodical Editor
Edward Bunting
periodical Title
Bunting - The Ancient Music of Ireland
volume Number
1
issue Content
16 ANCIENT MUSIC OF IRELAND.Such, in the Editors opinion, is the grand characteristic of Irish melody, a characteristicwhich pervades alike the defective class of song and pipe tunes, such as the first in the aboveexamples, and the perfect harp lessons represented by the latter.Independently of these particular features, Irish melody has also its own peculiarity ofstructure and arrangement, but this is more observable in the very old class of airs. Theseairs are for the most part in a major key, and in triple time; the modulation of the first partof the melody may be said to consist of the common cadence; the second part is generallyan octave higher than the first; it begins with the chord of the Tonic, and proceeds tothe Dominant with its major concord; it then returns to the Tonic, from which it progressesto the tone of the Submediant with the major harmony of the Subdominant, or to theSubmediant with its minor concord; but the harmony of this peculiar note is most frequentlyaccompanied by the major concord of the Subdominant; the conclusion of the air is genei allya repetition of the first part of the tune, with a little variation. This constitutes the structureand modulation of three-fourths of our song and harp airs, and the main features of such anarrangement, namely, their being principally in a major key, and in triple time, the rise ofan octave in the second part, and the repetition of the first part at the conclusion, with themodulation as above, are markedly observable in the composition of our most ancient melodies.Various harmonics, dependent on the taste or science of the musician, might be adapted tothose old airs, but it is presumed the above will be found to be the most correct and suitable.The most ancient, it may be observed, will be found more easily harrnoiiized than those of amore modern date; a certain indication of the greater purity of their structure.It will be observed, that the tones of the Dominant and Subdominant, with their corres-ponding concords and modulation above described, agree in a remarkable manner with thediapente and diatesseron of Cambrensis. Would it, then, be too much to surmise that thatwriter was, himself; acquainted with these peculiarities in the structure of Irish melody, which.have so long eluded the search of modern iusicians, and that this famous account of Irishmusic in the twelfth century which he has given us, is actually a scientific description of themodulation of a genuine Irish tune, as preserved to the present day?Irish song music being thus carefully adjusted to one standard of arrangement, a conjec-ture may be hazarded as to the character of the original melody on which the whole schoolhas been founded.The Young Mans Dream, and the air of The Green Woods of Truigha, mightbe suggested as answering more nearly to the Editors conception of such a standard thanany others with which he is acquainted. The latter melody is of great antiquity, as is provedboth by its structure, and by the fact of its being known by so many different names indifferent parts of the country. Thus, it is known in Ulster as The Green Woods ofTruiglia, in Leinster as Edmund of the Hill, in Connaught as C olonel 0 Gara,and in Munster as More No Beg, with a variety of other aliases.
issue Number
1
page Number
22
periodical Author
Edward Bunting
issue Publication Date
1840-01-01T00:00:00
allowedRoles
anonymous,guest,friend,member