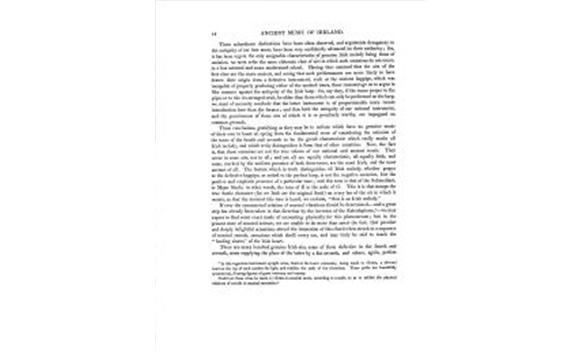 Previous | Next
Bunting - The Ancient Music of Ireland, Volume 1, Issue 1, Page 20
18 views
Favourite | Share | Feedback
periodical Publisher
Hodges & Smith, Dublin, 1840
periodical Editor
Edward Bunting
periodical Title
Bunting - The Ancient Music of Ireland
volume Number
1
issue Content
14 ANCIENT MUSIC OF IRELAND.These subordinate distinctions have been often observed, anti arguments derogatory tothe antiquity of our best music have been very confidently advanced on their authority; for,it has beeii urged, the only assignable characteristics of genuine Irish melody being those ofomission, n e must refer the more elaborate class of airs in which such omissions do not occur,to a less national and more modernized school. Having thus assumed that the airs of thefirst class are the more ancient, and seeing that such performances are more likely to havedrawn their origin from a defective instrument, such as the ancient bagpipe, which wasincapable of properly producing either of the omitted tones, these reasoners go on to argue inlike manner against the antiquity of the Irish harp: for, say they, if the tunes proper to thepipes or to the six-stringed emit, be older than those which can only be performed on the harp,we must of necessity conclude that the latter instrument is of proportionably more recentintroduction here than the former; and thus both the antiquity of our national instrument,and the genuineness of those airs of which it is so peculiarly worthy, are impugi ed oncommon grounds.These conclusions, gratifying as they may be to nations which have no genuine musicof their own to boast of, spring from the fundamental error of considering the omission ofthe tones of the fourth and seventh to be the grand characteristic which really marks allIrish melody, ami which truly dtstinguishes it from that of other countries. Now, the factis, that these omissions are not the true tokens of our national and ancient music. Theyoccur in some airs, not in all ; and yet all are equally characteristic, all equally Irish, andsome, marked by the uniform presence of both these tones, are the most Irish, and the mostaimcient of all. The feature which in truth distinguishes all Irish melody, whether properto the defective bagpipe, or suited to the perfect harp, is not the negative omission, but thepositive and emphatic presence of a particular tone ; and this tone is that of the Submediant,or Major Sixth; in other words, the tone of E in the scale of G. This it is that stamps thetrue Scotic character (for we Irish are the original Scoti) on every bar of the air in which itoccurs, so that time moment this tone is heard, we exclaim, that is an Irish melody.If ever the symmetrical relation of musical vibrations should be deterrnined,and a greatstep has already been taken in that direction by the inventor of the Kaleidophone,a_we mayexpect to find some exact mode of accounting physically for this phenomenon; but in thepresent state of musical science, we are unable to do more than assert the fact, that peculiarand deeply delightful sensations attend the intonation of this chord when struck in a sequenceof musical sounds, sensations which thrill every ear, and may truly be said to touch theleading sinews of the Irish heart.There are many hundred genuine Irish airs, some of them defective in the fourth andseventh, some supplying the place of the latter by a flat seventh, and others, again, perfecta In this ingenious instrument upright wires, fixed at the lower extremity, being made to vibrate, a silveredhead on the top of each catches the light, and exhibits the path of the vibrations. These paths are beautifullysymmetrical, forming figures of great intricacy and variety.Could not these wires be made to vibrate in musical tones, according to a scale, so as to exhibit the physicalrelations of sounds in musical succession?
issue Number
1
page Number
20
periodical Author
Edward Bunting
issue Publication Date
1840-01-01T00:00:00
allowedRoles
anonymous,guest,friend,member