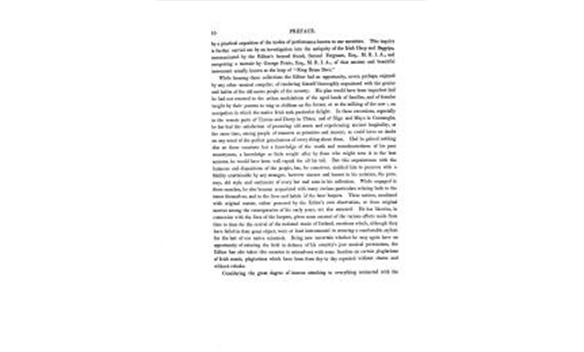 Previous | Next
Bunting - The Ancient Music of Ireland, Volume 1, Issue 1, Page 16
4 views
Favourite | Share | Feedback
periodical Publisher
Hodges & Smith, Dublin, 1840
periodical Editor
Edward Bunting
periodical Title
Bunting - The Ancient Music of Ireland
volume Number
1
issue Content
10 PREFACE.by a practical exposition of the modes of performance known to our ancestors. This inquiryis further carried out by an investigation into the antiquity of the Ii4sh Harp and Bagpipe,communicated by the Editors learned friend, Samuel Ferguson, Esq., M. R. I. A., andcomprising a memoir by George Petrie, Esq., M. R. I. A., of that ancient and beautifulinstrument usually known as the harp of King Brian Boru.While forming these collections the Editor had an opportunity, never, perhaps, enjoyedby any other musical compiler, of rendering himself thoroughly acquainted with the geniusand habits of the old native people of the country. His plan would have been imperfect hadlie had not resorted to the artless modulations of the aged heads of families, and of femalestaught by their parents to sing to children on the breast, or at the milking of the cow ; noccupation in which the native Irish took particular delight. In these excursions, especiailyin the remote parts of Tyrone and Derry in Ulster, and of Sligo and Mayo in Conn uglit,he has had the satisfaction of procuring old music and experiencing ancient hospitality, atthe same time, among people of manners so primitive and sincere, as could leave no doubton any mind of the perfect genuineness of every thing about them. Had lie gained nothingelse on these occasions but a knowledge of the worth and warmheartedness of his poorcountrymen, a knowledge so little sought after by those who might turn it to the bestaccount, he would have been well repaid for all his toil. But this acquaintance with thehumours and dispositions of the people, has, he conceives, enabled him to preserve with afidelity unattainable by any stranger, however sincere and honest in his notation, the pure,racy, old style and sentiment of every bar and note in his collection. While engaged inthese searches, he also became acquainted with many curious particulars relating both to thetunes themselves, and to the lives and habits f the later harpers. These notices, combinedwith original matter, either procured by the Editors own observation, or from originalsources among the cotemporaries of his early years, are also annexed. He has likewise, inconnexion with the lives of the harpers, given some account of the various efforts made fromtime to time for the revival of the national music of Ireland, exertions which, a1though theyhave failed in their great object, were at least instrumental in securing a comfortable asylumfor the last of our native minstrels. Being now uncertain whether he may again have anopportunity of entering the field in defence of his countrys just musical pretensions, theEditor has also taken this occasion to animadvert with some freedom on certain plagiarismsof Irish music, plagiarisms which have been from day to day repeated without shame andwithout rebuke.Considering the great degree of interest attaching to everything connected with the
issue Number
1
page Number
16
periodical Author
Edward Bunting
issue Publication Date
1840-01-01T00:00:00
allowedRoles
anonymous,guest,friend,member